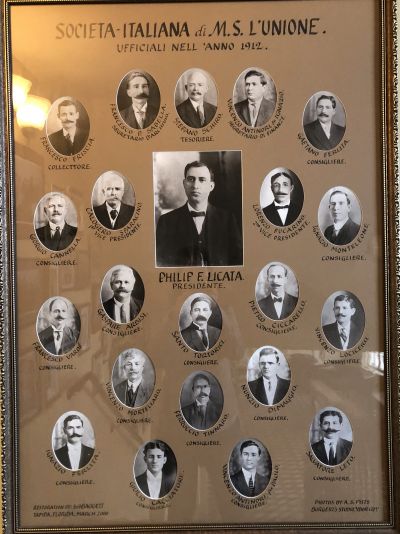 L’Unione Italiana, “The Italian Club” in Ybor City just north of downtown Tampa, FL, is in this great little neighborhood with a rich history of immigration from Latin countries like Sicily, Italy and Cuba. Emigrants from Sicily’s Magazzolo Valley arrived by way of New Orleans and in 1894 united to establish the club as a way of overcoming the social and economic challenges they faced in Southern Italy and Sicily.

The club’s charter members consisted of 116 Sicilians and Italians, eight Spanish immigrants and others with “good moral standing, aged 14-50,” many of whom worked together at one of the local cigar factories. These immigrants brought with them courage, imagination, resiliency, and a fierce pride in their culture and achievements. During the 1890’s to 1930’s, 90 percent of Ybor City’s first and second generation men belonged to one of the mutual aid/social clubs.

L’Unione Italiana’s purpose was “to aid such members of said association as may become sick and provide for paying of burial expenses of such members as may die, and to promote fraternity, charity, and social intercourse among its members.” In 1900, they bought a cemetery and formalized death rituals according to Sicilian funeral customs. They imported Cypress trees for the cemetery, inset ceramic photos of the deceased on grave markers and offered death benefits to all members.

On Columbus Day 1912, L’Unione dedicated a clubhouse which burned down three years later, but through fundraising was newly reconstructed by 1918. The new building was designed by award-winning Tampa architects Leo Elliott and B.C. Bonfoey in the Italian Renaissance style with classical Greek columns, terracotta relief and marble. Listed on the National Register of Historic Places, it is a symbol of Tampa’s Mediterranean heritage and a monument to immigrant achievement.

Housed within the new clubhouse was a theatre, dance floor, library, cantina with gaming tables for dominoes, chess and scopa, recreation rooms, billiards rooms, gymnasium, steam rooms, bowling alley, handball courts, offices, a walk-in clinic, and pharmacy (a forerunner to HMO’s of today). L’Unione helped its members to become naturalized American citizens through English, arithmetic and American government classes and helped them adapt to a new country and way of life while maintaining their ethnic identity.

The first president, Bartolomeo Filogamo, was a bookkeeper at a cigar factory and brought with him linguistic and financial talents to get L’Unione set up and functioning. Filippo Licata served longest and was a dynamic leader under which the club saw extraordinary growth and social activity.

The Italian Club remains a social center for the bilingual community of Ybor City. Over the years, many opera stars have sung in the theatre and on Saturday nights there still are Italian and Cuban music dances. When I visited recently, a caterer was preparing for an entertainment event in the dining hall and the auditorium, which may be rented for private occasions.

The bi-monthly newsletter, L’Unione Italiana, updates followers of events and newsworthy information such as the social, cultural and educational functions organized by the Ladies Auxiliary and the Festa Italiana, an annual multi-day event much like Northeast Ohio’s local Italian festivals. “The Krewe of Italia,” partially modeled after the Mardi Gras social club, is a non-profit entity within L’Unione whose mission is to promote and preserve Italian culture and heritage. Members are involved in fundraising for the historical preservation of the building itself which houses a museum of antique artifacts from the old country such as a Sicilian cart, bocce balls, tambourines, and ceramics. Scattered throughout the building are many nostalgic photos from the early days of the club such as a 1924 photo of the 1800 members and their families.

After a visit to the club and a stroll through L’Unione Cemetery you may have worked up a taste for authentic Italian and Cuban food or desire to relax with a good cigar. The restaurants and cigar shops in Ybor City will not disappoint!

View the embedded image gallery online at:
https://www.lagazzettaitaliana.com/history-culture/9447-l-unione-italiana#sigProId45a9a3d45e
Tweet
More in this category: « Our Lady of Mount Carmel La Fisarmonica: The History of the Italian Accordian »