La Fisarmonica: The Advent of the Accordian 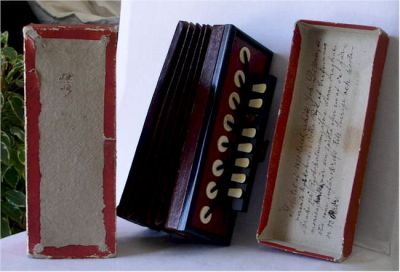 I have always thought that the accordion was first invented and built by Italians, probably due to my love of the accordion and accordionists that I encountered on my trips to Italy, but even among researchers, the advent of the accordion is still a subject of debate.

The accordion is one of several European inventions that are all free-reed portable instruments with external keys or buttons attached to opposite sides of hand-operated bellows. The “squeezebox” has many names: Accordion (English), Accordéon (French), Akkordeon or Handharmonika (German), or armonica a manticino in Italian.

Mr. Fredrik Dillner possessed what may be the world’s oldest accordion, a historic German accordion that arrived in Sweden in the late 1820’s. Hidden in a drawer in the Dillner family villa, the instrument was forgotten until, upon the deaths of his parents, Dillner became the owner of the Psalmodicon. And like his parents, he, too, put it away for many years until 1975 when he tried to sell it to a museum with no luck. It was revealed to the public for the first time in 2006 when Dillner once again attempted to sell it. It was then discovered through research that Johannes Dillner, Fredrik’s great-great grandfather, invented the Psalmodicon and had it built by Friedrich Lohner Nurnberg, who died in 1816, making it older than any other known accordion-like instrument.

Still, many credit C. Friedrich L. Buschmann’s Handäoline, patented in Berlin in 1822, as the oldest while others give that distinction to Cyrill Demian, of Armenian origin in Vienna, who patented the Accordion in 1829, hence, coining the name. Demian’s model was a modification of the Handäoline, with a small manual bellows and five keys. Numerous variations of this device soon followed such as adding rows of buttons for the playing of semitones and additional bass notes and chords. In 1829, Sir Charles Wheatstone of London patented the Concertina, also a free-reed musical instrument. It consisted of expanding and contracting hand bellows fastened between two sets of hexagonal boards that carried the reeds and valves. Unlike previous accordions, the concertina had buttons on both ends and not in the front of the instrument. Carl Friedrich Uhlig introduced the German version five years later, in 1834.

The earliest history of the accordion in Russia is not very well- documented, but according to Russian researchers, in 1830, Ivan Sizov and Timofey Vorontsov made a simple accordion modeling it from one that had arrived previously from Germany. By the 1840s, these masters were producing tens of thousands of accordions in Tula and neighboring villages.

By mid-19th century, in most of Europe, the button accordion was already widespread. It was being played as both a concert and folk instrument. A variant of both the accordion and concertina is the Bandonion, invented by Heinrich Band of Germany, with the hope of extending the reach of the German concertina from folk to religious services. And the first accordion to feature a piano-style keyboard for the right hand was invented in 1852, credited to M. Bouton of Paris, although another source claims that the first piano accordion was introduced by M. Bauer in Munich in 1854.

Italy was still an ensemble of small states under the dominion of several different powers when the accordion was introduced. Sicily and southern Italy were ruled by the Spanish Bourbons, Piedmont by the French, Northern Italy by the Austrians, and the Vatican by France and Austria. A watershed victory in 1860, at Castelfidardo, marked a turning point in Italian unification and brought new hopes and ideals for the people who were now beginning to envision their freedom from foreign domination. Appropriately, Castelfidardo is where accordions and concertinas first appeared in Italy, probably introduced by French troops.

As with everything, Italians soon applied their unique style to these instruments. In next month's issue, we will discuss the history of the Italian Fisarmonica.

View the embedded image gallery online at:
https://www.lagazzettaitaliana.com/history-culture/9445-la-fisarmonica-the-advent-of-the-accordian#sigProId2db91ed86a
Tweet
More in this category: « The Importance of Italian Winemaking Our Lady of Mount Carmel »