From the Italian American Press: "Coal War in the Mahoning Valley" 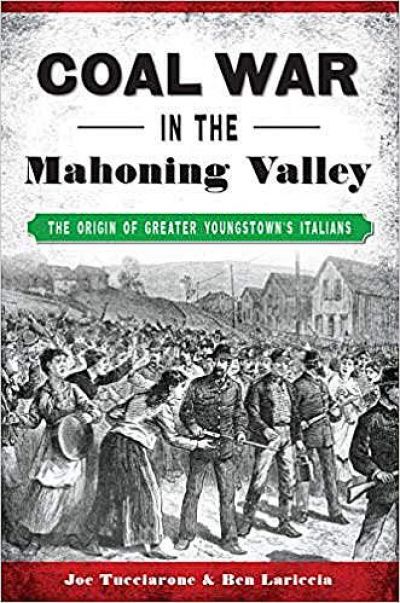 According to early records, Italian migration to Ohio dates back to the mid-1800s with a small number of families that lived mostly in or near Cleveland. By the turn of the century, the number of Italians had significantly increased to over 10,000 with many making their home in the Mahoning Valley. But what brought these Italian immigrants to an area almost 75 miles southeast of Cleveland?
In “Coal War in the Mahoning Valley: The Origin of Greater Youngstown’s Italians,” authors Joe Tucciarone and Ben Lariccia – descendents of immigrants from Italy who settled in the Mahoning Valley – present a historical account of the Italian immigrants who were brought to the area in 1873 to work in the coal mines during a labor strike.
The book contains two parts; the first entitled “War,” describes “the depth and scope of the hostilities between coal operators and miners.” A brief overview provides the background of the coal industry’s regional beginnings in the late 1850s and how it quickly grew. By mid-1868, the newly formed Church Hill Coal Company “extended rail lines to the shafts, installed heavy machinery and quickly erected modest lodgings for new workers.” Six months later, “a hundred tons of fine block coal were hauled out of the Church Hill mines every day.”
The iron works industry was growing and it needed fuel and the Civil War brought even more growth. It was “a national tragedy, but it was a boon to Youngstown’s iron and coal industries. By the end of the conflict, over a dozen new blast furnaces had opened in the city and the adjoining communities… Mahoning Iron Works was manufacturing more than sixty tons of hardware each day in the form of railroad spikes, nails, bars, hoops, and sheets of iron.”
On the opposite side of the Atlantic Ocean, Italy was going through its own war and the authors provide details of the events that eventually generated an exodus of Italians from Agnone, in what is now the region of Molise, lured by “the hucksters, likely in the pay of steamship companies, [who] posted circulars advertising the fortunes that immigrants could make in America.” A horrendous journey preceded their arrival in New York; but instead of jobs, an influx of Italian immigrants and the discrimination against them created dire circumstances and many were housed by the state and became part of a labor exchange.
In the years leading up to the strike, several accidents in the mines brought attempts by the miners for government oversight. The Ohio Mining Commission was established in 1871 and “legislature passed an act regulating the workings of the mines, but it was powerless, since not a single coal operator adhered to its provisions.” A rise in profits did produce an increase in the miners’ pay “from eighty cents to a dollar for every ton of coal they mined.” Soon after, though, “Calls for iron slumped, and as inventories rose, the iron makers issued fewer orders for coal,” and mine owners “agreed to cut the price they paid for their workers,” knowing a strike was imminent. With no coal, iron production stopped.
The authors address how strikes at other mines were handled, the threats of immigrants replacing miners, the employment of African Americans during coal mine strikes, how the Italian immigrants from Agnone were recruited, their experiences working in the mines, and the effect they had on the mining industry. After the strike, Italian immigrants continued to deal with challenges in making Mahoning Valley their home.
“Part Two: Peace” presents a look into some of the Italian immigrants who settled in Mahoning Valley: short biographies and some pictures add identity to those Italians who endured much adversity to become Americans.
Throughout the book, images of newspaper articles, industry leaders, Italian immigrants, maps, and other historical documents add visual interest. Footnotes, a bibliography and an index add authenticity and an appendix offers an abundance of supplemental documentation.
At a time when American history is going through some radical changes, “Coal War in the Mahoning Valley: The Origin of Greater Youngstown’s Italians” fills a void in the history of Ohio and the Mahoning Valley. This well-researched book should be available in public and school libraries, for every level of education from elementary school to college. This is Italian American history.

Tweet
More in this category: « The Gifts of the Fabbri Early Italian Immigrants Were Second-Class Citizens »