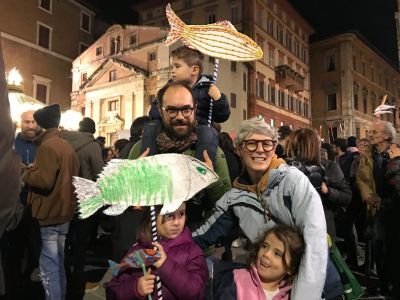 In the everchanging scope of Italian politics, a new anti-populist political movement calling themselves ‘Sardines’ is growing exponentially all over Italy as a response to Matteo Salvini’s bid to win power in traditionally left-wing Emilia-Romagna in crucial January elections. Anti-immigration politician Salvini’s hard-right League party (currently out of government) is polling far ahead of its rivals. The Sardines call Salvini’s rhetoric divisive and abrasive. Sardines, who claim to have no ambition of becoming a political party, have held peaceful protests in multiple Italian cities with more planned.

Le Sardine are gathering by the thousands in cities all over Italy demonstrating their opposition to Matteo Salvini, leader of the far-right La Lega (the League) and former deputy prime minister. Born as a spontaneous online movement, the “sardines” oppose hateful populist rhetoric and divisive political propaganda while promoting human rights for migrants and refugees. On November23, 2019 over 1,000 sardine gathered in Perugia.

What drew these schools of sardines into Italy’s piazzas? In late November, four former roommates in Bologna were chatting at lunch about the upcoming Salvini rally in their city. They decided to encourage a flash mob in Piazza Maggiore, asking participants not to brandish banners at this a-political encounter unless depicting their symbol, the sardine. The organizers hoped all would be “packed in the piazza like sardines.” The four friends had hoped to reach the 6,000-person capacity of the piazza. An estimated 12,000 to 15,000 showed up. In comparison, Salvini’s rally drew in 3,000. To date, Le Sardine have gathered in Bologna, Modena, Florence, Sorrento, Palermo, Reggio Emilia, Rimini, and Perugia, and even in NYC.

At the late-November Perugia gathering of Le Sardine, participants respected the norms set out by the young organizers, carrying – or wearing – only sardine images and avoiding any political references. Their posters promoted tolerance and harmony among all.

A beaming young woman held her colorful placard of a happy fish swimming over the words, “Chi odia ha paura,“ “he who hates is fearful.” Another young woman nearby urged “making love, not the League.” Many “mature” gatherers noted their pride in today’s youth.

It would appear that young Greta Thunberg from Sweden had inspired a memorable event in Perugia last year with the #FridaysForFuture rally. And now, four 30-somethings from Bologna had ignited the populace once again.

View the embedded image gallery online at:
https://www.lagazzettaitaliana.com/history-culture/9308-perugia-sardines-don-t-swim#sigProIda1e6c8e511
Tweet
More in this category: « A Look Back: ITALIAN AMERICANS - A CULTURE OF LOVE Superstition or Religion? The Ultimate Afterlife Destination: Heaven »