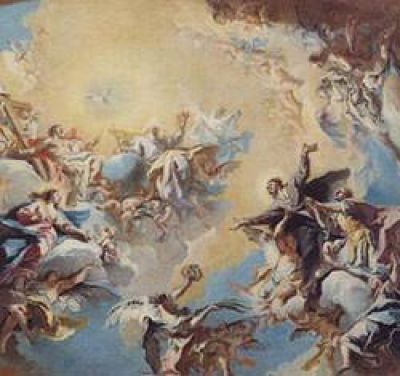 This is HEAVEN from the Last Judgment at Il Duomo di Orvieto Luca Signorelli, Resurrection of the Flesh, 1499-1502, fresco, Chapel of San Brizio, Duomo, Orvieto

The Roman Catholic Church teaches heaven to be primarily a state of being; a beatific, happy, blissful understanding of God, rather than a place “up there.” It is utter and absolute fulfillment. I liken it to Samadhi, the eighth limb of Yoga or Nirvana in Buddhism. The Catechism of the Catholic Church says, “We shall know the ultimate meaning of the whole work of creation and of the entire economy of salvation and understand the marvelous ways by which [God’s] Providence led everything toward its final end.”

To believe in an afterlife faith is absolutely necessary. No one has gone to purgatory, limbo, heaven, or hell and come back from the dead to tell us about it. I’ve wondered whether the Church believes that there can be “heaven on earth.” Pastor Jonathan Parnell says in an online article, “The way that heaven touches this world is through his (God's) people.” I have definitely experienced that feeling.

What is more difficult to comprehend, however, is “resurrection of the body” at the Last Judgment. An essential Christian doctrine – Jesus is said to have risen, body and soul, three days after he died on the cross – is included in the three infallible professions of faith: the Apostle’s Creed, the Athanasian Creed and in the Nicene Creed. “We look for the resurrection of the dead, and the life of the world to come.”

And the bible promises, “…he shall come from the heavens in glory with his angelic host, when he shall raise the bodies of all the men who ever lived. Then he will clothe the worthy in immortality, but the wicked, clothed in eternal sensibility, he will commit to the eternal fire along with the evil demons,” (First Apology 52, A.D. 151).

To live in this modern world is to be confronted with temptation and faced with ethical decisions every day: “What is right?” and “What is wrong?” Many Catholics find answers by following the tenets and teachings of the Church. They believe that the road to Heaven is a straight and narrow path and access to it requires a life slate free of venial and mortal sins. The if and when of acceptance into heaven is a matter of speculation but all who are waiting, either here on earth or in Purgatory, will, according to doctrine, finally enter at the Last Judgment. That is, unless you chose the road to Hell.

Praying to saints, religious statuary and images, investing in religious paraphernalia such as the scapular, candles, holy water, and relics with supernatural power, practicing rituals like novenas, pilgrimages and exorcisms and believing in concepts like Limbo, Purgatory, Hell, and Heaven may be considered very strange by non-believers and most likely misunderstood.

Faith in your chosen religion is the key. No matter how it is defined, culture, tradition, religion, or superstition, believers are simply honoring their beliefs through actions.