Universal Judgement: Michelangelo and the Secrets of the Sistine Chapel 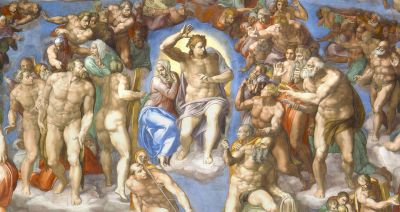 From the opening and closing ceremonies of multiple Olympic games to the Sistine Chapel and plenty of productions in between, Marco Balich has wowed audiences by “creating shows that amaze and speak to people’s hearts.” If you happened to catch the opening ceremony of the Rio Olympics, you understand just how amazing and special Balich’s productions are.

He has, perhaps, taken on his most ambitious project, yet: “Universal Judgement: Michelangelo and the Secrets of the Sistine Chapel.” Described as “artainment,” Balich’s show premiered in Rome this past March. The show transforms Rome’s former symphony hall into the Sistine Chapel in the hopes of giving audiences the feeling that they are sitting in the middle of the iconic chapel. “Rome is the only major European capital that doesn’t have a permanent show about its history,” Balich told the AFP. The show starts with blocks of rough marble sliding mysteriously around the stage before Michelangelo appears circling around the rocks evoking “beauty” until a sculpture emerges from the gray mass. “Everything is there,” Balich told the Local. “I seek beauty, the beauty is everything. It is my obsession.” The ambitious theatrical production earned the blessing of the Vatican. In fact, the Vatican Museum provided high definition photographs that are projected onto the canvas-covered stage, walls and ceilings of the hall.

The one hour-long production is meant to attract the younger generations as a means to teach them about their culture through art. “I want to talk to younger generations to teach them that beauty and art are an important way of learning about their own roots,” said Balich. “An hour is the attention span of the younger generation. If we tell the story well, we can get them interested.” The show quickly moves through the history of the Sistine Chapel’s most famed pieces. The grand finale is a prelude written by Sting and sung in Latin by the British pop star, along with 16 minutes of Vatican-approved narration.

After 9 million euros of public funding and over two years of work, it’s safe to say that Balich hopes his production is one for the history books. Tickets for “Universal Judgement: Michelangelo and the Secrets of the Sistine Chapel” in Rome are on sale now.

Tweet
More in this category: « Buon Onomastico, The Italian Name Day The Sea and Its History »