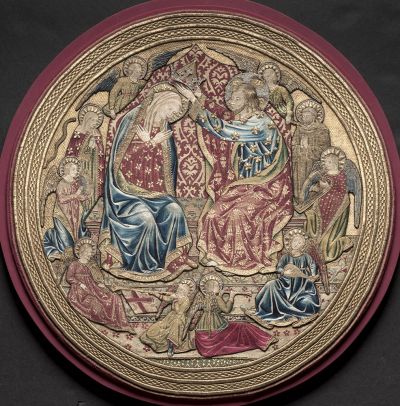 Embroidery from an Altar Frontal: Coronation of the Virgin Gold, silver and silk thread Italy, Florence, 1459 The Cleveland Museum of Art Purchase from the J.H. Wade Fund 1953.129

During the Renaissance, Florence emerged as an important center for a specific type of textile production, a form of embroidery known as or nué, or shaded gold. This vibrant and stunning technique used metal and silk threads to create pictures that rivaled paintings. Though the technique probably originated in Flanders, the Florentines took it to new heights of excellence and made it their own. Executed on a heavy cotton or linen background fabric with silk threads, split stitches and satin stiches in endless shades of color were skillfully used to couch down rows of metal threads to create incredible three-dimensional scenes.

A masterpiece of Florentine embroidery is preserved in the Cleveland Museum of Art made in this very technique. It takes the form of a tondo, a circular form, some 23-inches in diameter depicting the “Coronation of the Virgin,” and likely dates to 1459. This scene forms the final and culminating event in the narrative cycle of the life of the Virgin following her death and assumption. Christ, seated to the viewer’s right, is shown placing a crown on his mother’s head, honoring her as queen of heaven. Christ and the Virgin are both flanked by Saints Verdiana and John Gualberto and surrounded by eight angels, six of which are playing musical instruments. The scene is intended to be joyous. Each of the figures were embroidered separately and then sewed onto the background.

The or nué technique was a deluxe form of embroidery often used for ecclesiastical textiles such as vestments and altar frontals. The most famous surviving examples of the technique are the embroideries of Saint John the Baptist which are now preserved in the Museo dell’Opera del Duomo in Florence. They form a series of 27 scenes in the life of John the Baptist which once adorned vestments worn by priests of the Baptistry. They were commissioned by the Arte di Calimala, the Guild of the Cloth Finishers and Merchants in Florence.

Cleveland’s “Coronation of the Virgin” is believed to come from an altar frontal, the decorative cloth suspended below the mensa or table of the altar. We, unfortunately, do not know the church for which it was made. The inclusion of Saint John Gualberto, founder of the Vallumbrosan Order (a Benedictine congregation), in the design, was a conscious choice made by the patron. John Gualberto was a much esteemed saint in the city of Florence for his compassion for the poor and sick. Saint Verdiana, also seen in our textile, was another Tuscan saint noted for her generosity and sense of charity. Together, these two saints suggest a prominent theme of compassion and charity towards the needy. This possibly suggests that our embroidery, once sewed on its original altar cloth, was intended for a monastic church in or near Florence.

Florence was the most distinguished center of embroidery in Italy from the 1300s through the 1600s. Here, embroideries were first sketched by painters and then executed by professional embroiderers, usually men. Giorgio Vasari (1511-74), the Florentine painter, historian and writer, in his well-known book, “Lives of the Most Eminent Painters, Sculptors and Architects” (1550), spoke highly of the embroiderers’ craft. He observed that the artists who designed for needlework had the ambition to produce embroideries that looked as much like paintings as possible. Such embroideries made with expensive silver and gold threads were considered a luxury and were used in the homes of the rich for cushions, curtains and hangings. An inventory of the household furnishings of Lucrezia Borgia in 1502 mentions embroideries for bed furniture “in silk and gold and velvet embossed with gold.” Another inventory made in 1488 observes that in the wedding trousseau of Elizabetta Gonzaga of Montefeltro, “the cushions were of crimson satin with a network of gold and silver.”

The Church, however, was often the commissioner of expensive goldwork embroideries for vestments and other furnishings. We have already noted the embroideries of Saint John the Baptist intended to adorn vestments and now in the Museo dell Opera del Duomo in Florence. To meet the demand for embroideries for both secular and ecclesiastical patrons implies the existence of a significant and thriving industry in Florence. That such deluxe textiles ranked with paintings, goldsmith work and sculpture in terms of their desirability and visual impact cannot be doubted.

The “Coronation of the Virgin” embroidery, now in Cleveland, is today separated in time by over 500 years from its original context. We must visualize it with other embroideries applied to the same altar frontal. Where was the church and who was the patron? What was the impact upon the beholder? These are questions without answers. Within the confines of a church, the clergy and faithful, whether monks, nuns or lay persons, would have no doubt been overwhelmed by the sensory richness of the setting – the diffused and colored glass emanating from the stained glass windows, the flickering light of candles, the smell of incense. Religious art and liturgical objects – gold work on the altar, sculpture and frescoes and sumptuous embroidered textiles would have impressed and inspired in a way now difficult to imagine. In this ethereal world, the liturgical performance achieved an otherworldliness. Our textile, to be sure, was known and appreciated in such a setting.

Tweet
More in this category: « The Feast of the Epiphany on January 6 The Prevalence of Luck in Italy's New Year »