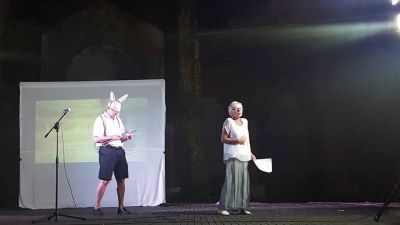 "What angel wakes me from my flowery bed?"

It isn’t only in the land of his birth that the 400th anniversary of Shakespeare’s death is being commemorated. In several Italian cities (Rome, Verona, Venice, and Padua to name but a few) there are festivals all summer and early autumn with outdoor performances. Incidentally, in Rome, they have even built an exact replica of the Globe Theatre in the Gardens of the Villa Borghese, and appropriately enough, there are performances of “The Merchant of Venice” in the Ghetto in Venice.

On a recent midsummer night, the great university city of Padua celebrated the 400th anniversary of the death of Shakespeare. It’s possible that the greatest playwright who ever lived visited Padua, and if he didn’t, he ought to have done so. Certainly he mentions it, along with several other important cities of the Veneto in some of his plays. (It’s also suggested that his “dark lady” of the sonnets might have been a musician from nearby Bassano.)

But this was Shakespeare with a difference. They had the brilliant idea of emulating Speakers’ Corner in London’s Hyde Park, and inviting anyone to come along and recite a piece of Shakespeare for 400 seconds.

The event took place in an outdoor theatre behind Palazzo Zuckermann (just opposite the world famous Scrovegni Chapel with its frescoes by Giotto) on a balmy evening when bats zipped through the air and spotlights brought the textures of ancient brick walls into high relief.
There was an excellent jazz band and a couple of professional actors at the beginning – in Italian – and the rest, miraculously, was performed by volunteers doing their own thing, either wholly in translation, in a mixture of Italian and English, or in a few cases, amazingly, entirely in (accented) English. All highly commendable. We had a good cross-section of Shakespeare’s works; from the sonnets, various scenes from “Macbeth” (three crooked witches and an eerie Lady Macbeth) an Othello (who sounded as if he’d lived in the east end of London for a while), “The Tempest,” “Twelfth Night,” “Hamlet” (a young man had learned the “To be or not to be” soliloquy in English, but would have benefitted from help with pronunciation; and the graveyard scene where inexplicably the skull of Yorick was represented by a pair of white baby shoes), a fantastic King Lear influenced by Kurosawa, a very good Merchant of Venice, and more.

I had asked a friend some months ago whether anyone would be performing with English as a mother tongue.

“No,” she replied. “Unfortunately we don’t know anyone…” (then looking meaningfully at me)…“Yes we do!”

And so it came to pass that my partner and I did an extract from “A Midsummer Night’s Dream.” I borrowed a garland from our local amateur dramatic society, and Bill bought a large pair of ears from the joke shop.

I gave an introduction in halting Italian explaining the story so far, then went to sleep on my flowery bed leaving the stage for Bottom’s entry, to cheers and applause for his amazing ears. With lots of friends in the audience we hammed it up a bit, and loved every minute. In fact, the director/organiser, Gianluca Meis, gave us a particular mention and a photo in the publicity the following day. This “pop-up Shakespeare” event is happening in other small towns in the Veneto all season.

To my fellow English speakers who say Shakespeare is too difficult, I say – take this original idea as a shining example of how his words can be savoured, (they also sound terrific in Italian) and loved by people of any age and any nationality. It takes a little work, yes, but the pleasure of the experience will last a lifetime.