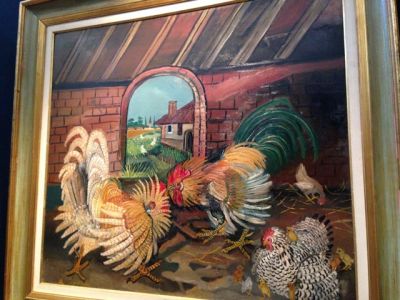 In northeaster Umbria, Gualdo Tadino, of pre-Roman origins, perches like a silent sentinel on a forested hilltop. A few of the ancient town’s buildings miraculously survived the devastating 1751 earthquake: one was the frescoed 13th century church of San Francesco, dedicated to the beloved Saint of the nearby hill town of Assisi.

The pale pastel colors of the church’s medieval frescoes – many depicting San Francesco and other Franciscan saints – now gently backdrop the dazzling colors of another artist, Antonio Ligabue (1899 – 1965). Often called “Italy’s Van Gogh,” Ligabue’s tormented life screams out in his fulgent paintings, like the anguished, feral howls of the animals he often depicts.

The Italian painter is one of the most important Naïve artists of the 20th century.
1. Gualdo Tadino, perched on a forested hilltop.
2. In the San Francesco churches, medieval frescoes in pastel tones backdrop the Ligabue show.
3. The dazzling colors of Ligabue, often called “Italy’s Van Gogh.”