A Wax Artist’s Model from the Renaissance 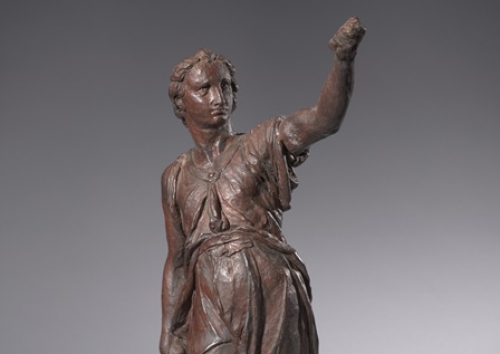 Wax Artist’s Model from the Renaissance

The artist-client relationship was fundamental to the success of artists during the Middle Ages and the Renaissance. Patrons demanded to know what they would be paying for and required a preliminary sketch of a building, a sculpture or a painting in advance of its production. The creative process has not changed significantly in the past five or six centuries. Architects today, for example, will provide a rendering of a design to their client.

For the Renaissance artist, it was necessary to provide a rough sketch on paper to his patron, whether a wealthy nobleman or an ecclesiastical committee, such as a chapter of canons considering new embellishments for a chapel or a church. Both Michelangelo and Leonardo worked up designs for sculpture or frescoes in the form of quick sketches. These could be produced cheaply and rapidly in order to give the client an impression of the finished product. Many of these still survive.

Starting in the first half of the 15th century, sculptors in marble and bronze relied increasingly on three-dimensional models, called bozzetti, and less on drawings alone. Working with a three-dimensional form from the outset encouraged sculptors to plan their works from multiple points of view and create more dynamic and challenging poses. Bozzetti could be produced rapidly in clay or wax for presentation to the patron, saving the finer and more expensive materials of marble or bronze for the finished product. They could also be modified as needed. Like drawings, these models very quickly came to be appreciated in their own right as mementoes or as part of a greater interest in the artist and his creative process.

A bozzetto in red beeswax, now preserved in the Cleveland Museum of Art, is a beautiful example of this creative process. It stands 24 ¼ inches in height and represents a standing figure with left arm raised, garbed in flowing drapery. It is the model produced by Annibale Fontana (1540-87) for one of the two marble statues of trumpet-blowing angels crowning the pediment of the Church of Santa Maria presso San Celso in Milan. The structure had begun to be built in 1493 to house the miraculous icon of the Madonna. It was constructed on the grounds adjacent to the venerable Romanesque basilica of San Celso with the west façade of the new church completed in 1572. The new façade was to be enlivened with dramatic three-dimensional figures as well as reliefs dealing with images of Mary.

Annibale Fontana first worked as a medalist and engraver in Milan and joined the Accademia della Val di Blenio. As a result of this association, Fontana received numerous commissions from high-ranking patrons and intellectuals. He visited Rome where he was influenced by Michelangelo and then traveled to Palermo in 1570 where he carved large-scale marble reliefs for their cathedral. Fontana then returned to Milan and started working on the church of Santa Maria presso Santo Celso. He worked there from 1574 to 1587 and his style changed from Mannerism to classicism. He died at the age of 47 in 1587. The majority of the statuary of Santa Maria was produced by Fontana though initially the commission had been divided between two artists. Fontana devoted nearly his entire energy to the completion of this project until his death.

Fontana’s wax bozzetto is thought to have been made around 1583-84. The wax is shaped around a metal armature now embedded inside the figure. It stands on a roughly hewn block of wood indicating that it was never intended to be seen as a finished work of art. The artist would have worked fairly rapidly shaping and re-shaping the wax until it achieved the dynamic form he wished to present to his client. When this presentation took place or even to whom is not known and has not been recorded. Did Fontana present his wax angel to the canons of Santa Maria or perhaps to the Archbishop of Milan? The construction of the façade was a lengthy and expensive project. He would have no doubt prepared bozzetti for each of the sculptures on the façade and also those on the interior of the church. Were the wax models presented as a group or were they shown individually on a case by case basis? We would love to know more.

At the center of the pediment of Santa Maria presso San Celso is a statue of the Madonna completed in 1584. The two trumpet-blowing angels, of which the wax model survives in Cleveland, and two additional venerating angels were produced between 1584 and Fontana’s death in 1587. A marvel of the Cinquecento, the façade of Santa Maria has paid the price for its free and unprotected position. Exposed to the elements, the surface of the marble is worn. Observing this as early as 1620 led the chapter of the church to order the esteemed and venerated sculpture of the Madonna to be taken down and replaced with a copy. The original was placed in the first chapel on the north side as one enters the church. The unfortunate result is that this beautiful sculpture is now seen from too low a vantage point. The original trumpet-blowing angels, however, may still be seen above the pediment.

In a strange twist of history, Annibale Fontana’s wax bozzetto, which was never intended to be saved as a finished work of art, has survived. One can only assume that this gifted artist would be baffled that this object is now treasured and displayed in a museum in a place that would have been unknown to him. America, then entering its colonial phase, is certainly the last place he could have imagined his wax model. For us, this beautiful object is not only an important historical document; it is a work that vividly illustrates the artistic process in the Renaissance and the artist-client relationship. Those who visit Milan today should be aware of this connection with Fontana and Cleveland.

Model (Bozzetto) for a Trumpet-Blowing Angel

Red beeswax mounted on metal wires and a block of wood, H. 24-1/4 inches