The Power of Relics 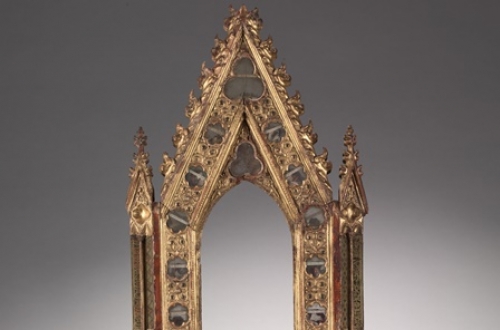 The Power of Relics

During the 1300s, the Italian peninsula was occupied by numerous independent kingdoms, communes and city states that did not always live in harmony. The period saw the generally sustained growth of thriving urban centers teeming with mercantile wealth and ever-growing populations in which bankers, merchants, tradesmen, and craftsmen formed an emerging middle class. Italy's cities, like Siena and Florence, emerged during this period as the pre-eminent domains of power, culture and knowledge. At their center rose large cathedrals, palaces and civic buildings, all requiring religious art and funded by communal governments or aristocratic rulers as symbols of authority and wealth.

A visit to Siena today transports the modern visitor back in time to the city's medieval past. The historic city center of Siena has been proclaimed a UNESCO world heritage site. The marvelous Piazza del Campo, the site for the Palio horse race, impresses with its great medieval buildings such as the Palazzo Pubblico. The Duomo, which was begun in the 12th century, stands as a masterpiece of Italian Romanesque-Gothic architecture. Siena was both a cradle and a magnet for great artists such as Duccio, Simone Martini and Pietro Lorenzetti, whose works supplied a burgeoning demand for religious art in the city. In 1348, the bubonic plague struck Italy's highly populated urban areas without mercy and Siena lost 30 to 50 percent of its population. Florence and Milan would rebound, but Siena, a thriving metropolis in 1340, never fully recovered.

There exists in the Cleveland Museum of Art a highly ornate reliquary frame, still containing its 17 labeled relics, that was produced in Siena in 1347, the year before the arrival of the plague. It therefore transports us to the eve of this tragic moment. The form of the reliquary is known as a gabled reliquary tabernacle. Some 25 inches in height, it displays its relics behind small glass windows. It once contained at its center a reverse painted glass image of the Madonna and Child which was separated from the frame at some point in its history. The painting now survives in the Fitzwilliam Museum in Cambridge, England. The Cleveland reliquary frame is double-sided and carved from wood and pastiglia, then gilded and further embellished with glass cabochons and rosettes. It would have shimmered when new. Of particular interest are the inscriptions on the base.

One inscription dates the object to 1347. Another, along with two heraldic panels on the base, identifies the patron: Mino di Cino of the aristocratic Sienese Cinughi family. The inscription reads in Latin: "This work has been made under the year of our Lord 1347 in the time of the Lord Mino di Cino." Two further heraldic panels belong to the Ospedale (hospital) of Santa Maria della Scala. The hospital received its name from its location on the Piazza del Duomo across from the steps leading to Siena Cathedral. The hospital's philanthropic mission included care of the sick, destitute, orphans, and pilgrims. Its rector oversaw a community of lay brothers who operated the hospital. Its origins date back to the 12th century and it continued operation through the 18th. Here, meals were served to the poor three times a week.

In the 1330s, Santa Maria della Scala commissioned many important interior and exterior frescoes as well as several significant altar pieces. The exterior frescoes commissioned for the hospital unfortunately no longer exist. Due to well-kept documents, the artists who created these magnificent frescoes can be identified as Simone Martini and the Lorenzetti brothers, Pietro and Ambrogio.

The interior artwork of Santa Maria della Scala, however, has survived through the centuries. The majority of these works were altar pieces that were produced after the Black Death. Several artists during the 1370s to 1390s created these paintings. The principal artist of the altarpieces was Bartolommeo Bulgarini. His two latest surviving paintings were a "Madonna" and an "Assumption of the Virgin." The "Assumption of the Virgin," commissioned in 1339, was the largest and most extravagant work for the Ospedale altar containing the relic of the Virgin's girdle.

Mino di Cino Cinughi was the hospital's rector from 1340 until 1351. Rectors typically commissioned gifts for the foundation emblazoned with their family's and the hospital's coat of arms. Two inscriptions on our reliquary frame state that an artist named "Lucas" made it. These might refer to St. Luke, who legendarily painted the Virgin from life, thus constituting a claim for the authenticity for the object, the central image of the Virgin (now missing), and the surrounding relics. More convincing, however, is the idea that they are the "signature" of a documented artist called Lucas, brother of the accomplished Sienese goldsmith and enameler Ugolino di Vieri. Lucas seems to have been a highly versatile craftsman specialized in translating luxury metalwork into other, less precious, materials such as wood. Our reliquary frame makes strong allusions to metalwork, in particular the painted glass, which simulates the appearance of enamel. Such a stunning object was the perfect receptacle for important relics.

It is difficult today to imagine the power that holy relics once held over medieval life. Relics served as a physical link between the natural and supernatural worlds. Relics were chiefly the physical remains of the saints, who became, through their relics, the natural intercessors for humankind. Those who had relics in their possession, such as ecclesiastical institutions, clergy, confraternities, or private individuals, were obliged to display them prominently in lavish reliquaries. We know that Siena's hospital of Santa Maria della Scala possessed some important relics. In 1359, the hospital acquired several new relics, including part of the Virgin Mary's girdle (belt) and her veil, possibly to stimulate pilgrim travel. More relics were acquired under the Rector Giovanni Buzzichelli. Other relics owned by the hospital included those of Saints Augustinus and Marcellinus, and a nail from the cross of Christ.

The Cleveland reliquary frame contains relics that were likely obtained by the hospital's rector, Mino di Cino Cinughi. They seem to have been chosen for their relationship to the hospital's activities, including the housing of pilgrims and care of the sick. For example, pieces of the True Cross are the ultimate pilgrimage relic; Saints Juliana and Elizabeth of Hungary were healers whose relics are also included. Relics of the Holy Innocents may refer to the hospital's rescue of children, while several others belonging to mothers, such as Felicitas, a Roman matron martyred with her sons, may evoke the foundlings' absent mothers and the hospital's own parental role. Detachable from its base, the upper part of the reliquary frame could have been mounted on a pole and carried aloft in processions. Otherwise, the object likely resided upon the altar of a small chapel in the hospital. The reliquary celebrates Siena's principal patron, the Virgin Mary, and reiterates the hospital's devotion to her. This beautiful object is infused with the history of Siena. It was made just a year before the arrival of the plague in that city. One can imagine this gilded reliquary frame and its portrait of the Madonna, glistening in candlelight within the hospital's chapel, as the suffering and the faithful prayed for deliverance and sought the power of the relics.

The Cleveland Museum of Art, Gift of Ruth Blumka in Memory of Leopold Blumka 1978.26

Berlusconi in Hospital for Covid19

The 77th edition of the Venice Film Festival