The Historic and Contemporary Lake Garda 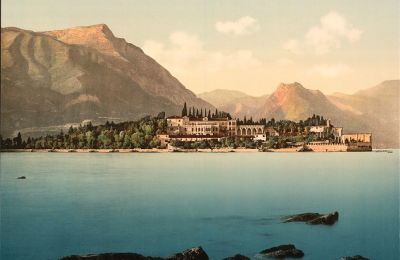 Shared by three regions – Veneto, Lombardy, and Trentino Alto-Adige – and the largest lake in Italy, Lake Garda extends about thirty miles south from the foothills of the Dolomites. Shaped like an inverted ax, the narrow northern section of the lake funnels through sloping mountainsides and cliffside peaks for about twenty miles before collecting into a basin at its southern end.

Of the lake’s five islands, Isola del Garda is the largest. Located in Lombardy near the southwestern shore of the lake, it was chosen as the site of a Franciscan hermitage in the early thirteenth century. Expanding on the refuge, a convent and monastery were built and the island was an active religious community until the late seventeenth century. In the late eighteenth century, Napoleon – in command of the Army of Italy in its battle against Austria – took control of the island and it was later sold to a private owner.

Ownership of the island passed through several counts and dukes, and in the early 1800s, the monastery was reconstructed into a villa. By the end of the 1800s, new owners had a palace – in the style of Venetian Gothic – built on the grounds of the old villa, and added a park and formal gardens. Today, the island is owned by descendants of Scipione Borghese and Count Alessandro Cavazza, and offers guided tours, by reservation, of the gardens and visits to the park. The park is a mythical wonderland with wooden sculptures nestled among the flora; the grounds are also available for weddings.

Also in Lombardy, on the south shore of Lake Garda, the narrow peninsula of Sirmione juts two miles into the water. At its tip are the ruins of a Roman villa, claimed to be the largest in northern Italy. Now an archeological park and recognized for its thermal waters, the area was also the location of a villa either owned by the family of the Roman poet Gaius Valerius Catullus (c 84-c.54 BCE) or where Catullus stayed as a guest. The ruins are known as the Grottoes of Catullus.

Less than one-half mile south of the ruins is Rocca Scaligera. Built on a thin strip of the peninsula – surrounded by the lake that functioned as a moat – the castle was built during the thirteenth century, commissioned by Mastino I della Scala, a member of the ruling family of Verona and the surrounding towns from the mid-1200s to the late 1300s. In 1405, Sirmione became part of the Venetian Republic.

Across the lake, about six miles southeast of Sirmione, in the town of Castelnuovo del Garda (Veneto) is Gardaland Resort, the largest theme park in Italy. Not accessible by water – a little over 12 miles by car from Sirmione – the park, opened in 1975, includes themed rides, hotels and restaurants, an aquarium, and LEGOLAND® Water Park, the first one in Europe.

The rides at Gardaland are divided into Fantasy, Adventure and Adrenalin. Themed restaurants include Pizzeria Saloon with pizza “baked in pizza ovens fired by beech wood aged for 24 months;” Merlin Stube, a “rustic farmhouse eatery” with “a medieval atmosphere;” Ristorante Aladino, with “enchanting Arabic architecture; and Buffalo Ranch for “the true taste of American BBQ ribs!”

Tweet
More in this category: « “Of Blood and Love: Growing Up on Federal Hill” by Carmine Sarracino An Excerpt: "Sunday Mornings" Passing the Torch »