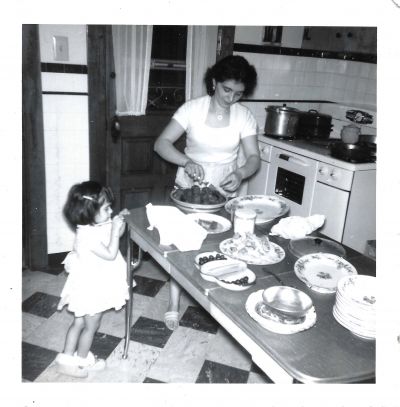 Joni and Mom in the kitchen

The unique life story of an Italian immigrant and her delicious original recipes.

The difference between Parlacce and Parolacce is one letter, “o.” However, their meanings are very different. Parlacce means talk or conversation but parolacce means curse words or profanity. When my sisters and I were growing up, we did not hear “bad words,” as we called them, or use them, whereas now, there is no escaping profanity, whether it be from the mouths of young people or mainstream TV.

What others might call exaggerated use of arms, hands, fingers, and facial expressions, are an important part of daily communication to an Italian, at least as important as the words used. Whether everyday conversations, communicating what you are feeling when you are happy and excited or frustrated and angry, or insulting someone during a quarrel, from the double-cheeked kiss to the “Che cazzo!” and everything in between.

“Mangia, mangia!” was our mother’s mantra after the meal was served and we were all in our places at the dinner table. But she was very strict in the kitchen while she was preparing our meals. “Get out of the kitchen!” is what we heard most often. Our southern Italian dialect version of this is “Iata vene a torna me!” Pronounced yah-teh-VAIN a-torna-may), literally meaning, “Go away from me!” If she wanted to shoo us all away, she would simply say, “Iatavéne!” (yah-teh-VAIN) or simply shortened it to “Vaténe!” (va-TAIN) which means “Go away!” using her elbow to push us aside if her hand was not available for the appropriate gesture! Even though we did not know Italian, we knew exactly what our mother meant when she yelled at us. There was no mistaking her hand gestures, the loudness of her voice and intonation, and facial expressions.

Since Mom always considered herself a “good girl,” she had expectations of her daughters to be the same. But, I am my dad’s daughter, and I had an attitude with her from the beginning of my life.

By the time I was two-years-old, Mom was worried that I had not spoken yet. Little did she know that I would more than make up for it and by age 12 began talking back to her! Regretfully for her, I became a “Chiacchierone!” and “State zitta!” became a regular admonition. It really sounded like “Shta ta ZEET!” The “sh” sound being part of the southern-Italian dialect.

There were many unique parolacce words that my sisters and I heard most when Mom was reprimanding us, me in particular. I often ran out to play without shoes as a child in the fifties and then again as a hippie in the late sixties. I loved it when she called me “Zingara!” even though she meant it disparagingly. This was the mildest of the words she used. When I talked back or would not obey her, she called me, “Prepotente!” “Svergognata!” “Sonnabolla!” “Diavola!” or, when younger, “Diavoletta!” and would tell whoever was around that I was “Cattiva!”

When Mom bought a bag of chips, she would dole out a few chips to each of her daughters. We could never reach into the bag and grab a big handful or heaven forbid, take the bag and just eat right out of it. If you tried, you would be called “Scostumata!” (sco-shtu-MA-ta) I heard this word many times growing up. This is the definition of scostumata: Che si comporta in modo contrario ai principi della morale, dell’onestá, della decenza. One who behaves contrary to moral principles, honesty, and decency. It is a great Italian word and packed a big punch when she used it, but to use this word because a child eats out of a chip bag in modern times would only elicit laughter.

I have less vivid recollections of the words “Stronzo!” “Sfacciata!” and “Maledetta!” but those were very strong words and my mother only used these when she was pushed too far. My mother would yell at us from the upstairs kitchen when she heard a little noise coming from the basement where we were playing, and, as my sister Mary recalls, it was usually aimed at me, the hard-headed one. In dialect, she would say that someday, someone would knock my head against the wall. “Qualcuno ti sbatterà la testa contro il muro!” In our dialect, this is the way she said it, “Caca doon t’spacca la coccia al muro!” My sister Mary would be in tears when she got yelled at her for little things like something not done or not done the way my mom wanted it to be done, but I never cried or felt bad when I was reprimanded. Ero una testarda!

Tweet
More in this category: « Potentially Dangerous The Italian Obsession with Food: A New Exhibition at Venezia Mestre »