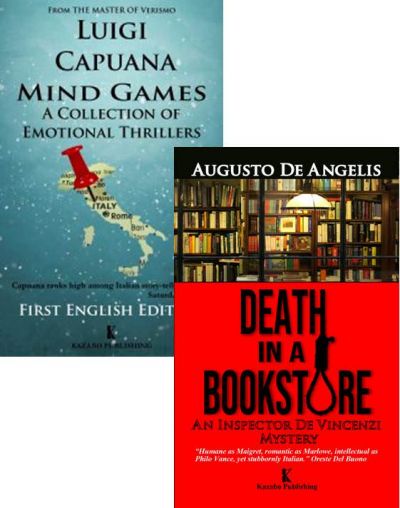 In the late 19th century, a new approach to writing took hold among Italian authors: depicting a practical and unbiased look at life. Taking root from a naturalist writing style, novelists focused on the characters’ emotions based on real-life situations, regardless of their social standing. Known as verismo (realism) their stories embodied the characters’ reactions within their surrounding circumstances.
A significant contributor to the verismo movement, Luigi Capuana (1839-1915) was a proponent of the short story. In 1902, in the preface of his book, “Delitto Ideale” he wrote, [translated] “short stories seem to reflect best the feverish demand for quickly changing impressions and sensations.” Capuana’s insight may be just as relevant today.
A native of Sicily, Capuana studied law for several years before leaving to become part of Garibaldi’s quest for Italian unification. His first published work, in 1861, was a tribute to Garibaldi. He moved to Florence and later Milan, where he wrote critical essays, became a theater critic and then a journalist. It was during this time that he met with other writers and the verismo movement began.
Capuana moved to Rome in 1882, where he taught Italian literature and met Luigi Pirandello, influencing Pirandello’s style of writing. He returned to Sicily in 1884, teaching aesthetics at the University of Catania (near his hometown of Mineo). His interests centered on the theoretical and philosophical aspects of writing.
In 2017, Capuana’s “Delitto Ideale” was translated into English by Kazabo Publishing. In the Foreword, he is described as a “prolific writer” with “six novels and many more volumes of short stories, plays, essays and other works during his lifetime.” Published as “Mind Games,” the book is a collection of 15 stories, each drawing the reader into a conversation, whether with another person or within one’s mind, or into a scene, compelling the reader to continue as an observer.
Labeled “emotional thrillers,” the characters and the observer flawlessly move through each quandary, as private conversations are open to the public. In “The Suggestion,” two men discuss a female acquaintance: “And not only...am I not in love with that lady, but I actively can’t stand her! I find her unpleasant…I can’t stand her!” In “The Choice,” “It’s impossible to reason with you!...Do you want proof? I will tell you a story. It is a true story; I didn’t invent it to make a point. I already know how you will judge it, and this will be the confirmation of my thesis.” In each story, the dialogue flows and the reader/observer transitions into the conversation, shifted to another time and place.
Although not considered part of the verismo movement, the writing style of Augusto De Angelis (Rome; 1888-1944) does reflect on the philosophical aspects of the characters. In the translated English version of “Death in a Bookstore,” he wrote about his protagonist, Inspector De Vincenzi, “He wanted, he needed, to find the truth, examining the various characters in a play. It was an exclusively psychological work. He believes that everyone acts as they are capable of.”
De Angelis created Inspector Carlo De Vincenzi to provide Italy with a counterpart to the well-known crime drama detectives Sherlock Holmes and Hercule Poirot. The Inspector De Vincenzi series spanned from 1935 to 1942 with books and a television show. De Angelis is acclaimed as the “father of Italian crime fiction” and is said to have influenced Andrea Camilleri, author of the popular book and television series featuring Inspector Montalbano.
Like the beginning of Capuano’s career, De Angelis started in the field of law, but left to pursue a career in journalism. De Angelis wrote plays and non-fiction and for national newspapers. Between 1922 and 1933, while Italy was governed by the National Fascist Party, he interviewed Mussolini three times. De Angelis did not favor fascism, and it is noted that Mussolini was not pleased with the resulting impressions left by the interviews.
In rule, the Fascist Party imposed its ideology on the people of Italy and enforced censorship of published works. In 1941, mystery novels had to receive authorization for publication. In 1943, murder mystery books were confiscated and destroyed. That same year, De Angelis wrote numerous articles, published in a leading newspaper, revealing his anti-fascist views. He was arrested and imprisoned. Shortly after his release in 1944, he was beaten and later died from his injuries. Sources suggest the Fascist government was, in some way, involved in his death.
In describing Inspector De Vincenzi, De Angelis wrote: “He used to only proceed mainly by intuition, guided by a hidden and unknown sense, which enabled him to give weight and value to the most marginal facts, microscopic clues, while disregarding what others considered to be the most clear and blatant evidence.”
As the clues unfold in “Death in a Bookstore,” the list of suspects grows, but De Vincenzi remains “confident that he was right…and hadn’t erred in his observations and deductions…if, somehow, some piece of the puzzle were missing…he was still certain the truth would reveal itself, like a flame in the darkness.”
Both Luigi Capuana and Augusto De Angelis created characters who exposed their inner thoughts in each unique situation. Capuana was involved in the beginning stages of verismo, De Angelis brought it further along, and it continues today through their books and through those who learned from these authors.
For more about “Mind Games” and “Death in a Bookstore,” visit kazabo.com.