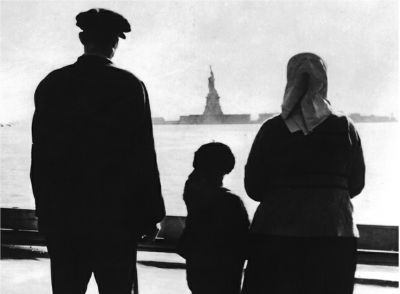 Over the last few months, we have been exploring our Italian heritage from the perspective of our ancestors’ life experiences. Last month I shared some tips on how to find your ancestor’s passenger list. This month, we are going to look at what it was like for our ancestors as they arrived at Ellis Island, the major port of entry for over 12 million immigrants between 1892-1954.

After nearly two weeks at sea, you can imagine the anticipation the night before the steamer would arrive in L’America. Passengers slept little. In the early morning hours of landing day, the women traveling to join their husbands or fiancés would pull out their finest clothing and try to look their best for their long-awaited reunions. Mothers would clean up their children and dress them in the finest clothing that was brought for the purpose of greeting their fathers. For some of these children, it would be the first time they would meet their fathers, having been born when their fathers were in America working to save for their passage! The men would be scrambling to find some fresh water to get a quick shave and look their best.

Excitement was also coupled with nerves. What if after this long journey, the immigration inspectors found something wrong and turned you away? Those who had never been to America before were nicknamed “Greenhorns.”The “Greenhorns” would be found practicing answers to the questions that could be expected to be asked of them from the immigration officials. No one wanted to give a wrong answer and be sent back. In particular, after the passage of the 1885 Alien Contract Labor Law in an attempt to stop the practice of padroni, immigrants were “coached” by those who had been to America before to tell immigration officials that they had no job waiting for them and no nonrelated third party had paid for their passage. For some it seemed strange to tell an immigration official that they had no plan to support themselves in America.

The steamer crew in the hours before landing, would be busy bringing up from the baggage hold all the passengers’ bags and trunks and placing these on the upper deck. These parcels had to be inspected and disinfected by customs officials before the passengers were taken to Ellis Island for processing.

As a steamer approached New York, it would be stopped in the lower harbor for a short quarantine period that included an inspection. Examiners from the Immigration Service would board the ship and inspect the passengers for obvious signs of illness by checking for contagious diseases that could cause an epidemic or afflictions such as lice. For a short period of time there were even female inspectors whose job it was to identify women who were being brought into the country for immoral purposes. Occasionally a whole ship of passengers would have to be removed and treated for one of these conditions.

After a successful inspection, the quarantine was lifted allowing the steamer to be docked at the pier. First and second-class passengers and those in steerage who were U.S. citizens were discharged at the pier, while the remainder of the steerage passengers were shuttled onto barges along with their baggage and transported to Ellis Island. As they approached Ellis Island, they passed the Statue of Liberty. At the base of Lady Liberty is a bronze plaque installed in 1903 and inscribed with this poem which was written in 1883 to be auctioned off as a way to raise funds for the statue’s pedestal:

With conquering limbs astride

from land to land;

Here at our sea-washed,

A mighty woman with a torch, whose flame

Is the imprisoned lightning, and her name

Mother of Exiles. From her beacon-hand

The air-bridged harbor that

your storied pomp!" cries she

"Give me your tired, your poor,

The wretched refuse of your teeming shore.

Send these, the homeless,

I lift my lamp beside the golden door!"

My grandmother, Giovanna Di Domenico Torella, was one of those who came ashore at New York. I wish I had asked her more about her journey, but the one thing I do distinctly remember her telling me was how she felt when she finally arrived in America and saw the Statue of Liberty in the harbor greeting her! Every time I see Lady Liberty myself, I think of my grandmother and all those millions who saw her as the symbol of America welcoming them to their new lives. I cannot help to shed a few tears and be thankful that they took the risk to journey here to our America.

Next month we will complete our ancestors’ journey through Ellis Island.

For arriving immigrants, Lady Liberty in the New York harbor was a symbol of welcome and hope after their long journey across the Atlantic.