Discovering La Famiglia: How Did Your Family Get Its Surname? 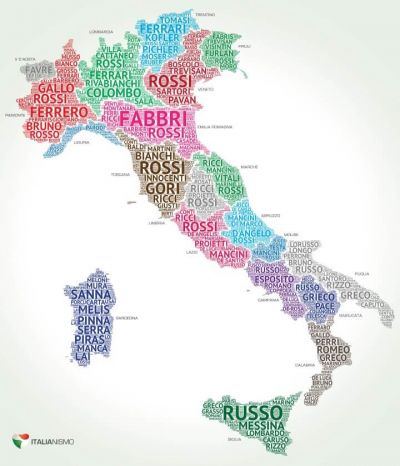 This month as we celebrate Italian American Heritage Month, I cannot think of a better way to celebrate than by learning about one’s roots in the Motherland. One of my favorite areas in Italian genealogy is the origin of our Italian surnames. If you are like me, you may have wondered how your family got its surname or cognome. I find the sound of Italian family names very melodious, particularly here in America where they are often butchered in both pronunciation and spelling. I always wondered just how some of these names came into existence. In my research, I have discovered that locating the origin of an Italian surname is not a simple feat. Many factors have influenced the surnames we now carry here in the 21st century.

To provide you with a sense of the myriad of sources, we need to go all the way back to the 11th century in Northern Italy. It was here that the whole idea of a second name began to catch on. However, it took nearly another 800 years for the practice to cement itself in Southern Italy. Over the centuries, families changed their surnames by adding or removing prefixes or suffixes and occasionally shortening a long name. After landing on American soil, some names became anglicized. Consequently, your original 11th century ancestor's family name may look different from the one you have now.

There are currently over 1 million last names in Italy. This situation makes it impractical to attempt to cover all of them in this column. Therefore, we will focus on generalizations and how to dissect a name to discover its origin. Most surnames are born from four general categories: personal names, nicknames, places, and occupations.

The most common origin is the personal surname that comes from the name of an ancestor, such as a father or grandfather. These are known as patronymic surnames, but some could be metronymic, meaning that they come from a female ancestor. An example of a personal name evolving to a last name would be Marco figlio di Giacomo, Marco the son of Giacomo, whose surname becomes Di Giacomo.

The second most common source can be found in nicknames. These are perhaps the most interesting or colorful of all. They derive from a description that was given to an ancestor based perhaps on a physical characteristic, personality trait or circumstance of his or her life. In some cases, the name comes from a pleasant attribute; however, they can also be based on undesirable ones, too. Someone whose name was Giovanni and who had red hair may have been called Giarusso. Conversely, an overweight Giovanni may have earned Giangrasso. Eventually the nickname sticks to the family of Giovanni and many generations later his descendants carry on a family name that may be hundreds of years old and no one even remembers "Fat John."

The last names that come from the names of places are probably the easiest to spot. Sometimes simply looking at an Italian map of the region where your family hailed from will show that their surname is based on their hometown or a nearby town. An example is the surname Catanzarito. Catanzaro is the capital of Calabria, and it is not hard to deduce that someone who came from Catanzaro may be called Catanzarito, particularly if that person moved to a new town. My own surname Torella likely comes from a town in Molise named Torella del Sannio. Even though I cannot trace my family precisely to that town, I am able to trace them to Pietrabbondante, about 8 km away. What is more interesting is that Torella, which some may think derives from the Italian word for bull, toro, actually means "little tower" in the local dialect. I was happy to discover that my surname is more likely a place name rather than a nickname from a "bullish" forefather.

An ancestor's vocation may have contributed to your surname. Occupational last names can be straightforward as in Lattari, from the Italian word latte. Perhaps you have a milkman in your family tree. Others may not be as easily discernible. Perhaps your surname comes from an ancestor who cultivated or sold a product such as apples or mele and thus your surname is Mellilo.

There is an important caveat to mention here. Because there have been centuries of change in Italy's language, customs and political events, it would be unwise to make a general assumption about a name based on its literal translation without doing a bit more research. I recommend studying the region your family came from to learn how Italian history may have influenced your lineage. Notably, a word in Calabria may have a different meaning than a similarly spelled one in Tuscany; local dialect can make a difference. Most importantly, even if you do not figure out your surname's exact origin, you can certainly wow your family with your theories about how they became known as they are today.

A wealth of information about Italian surnames can be found in the book "Our Italian Surnames" by Joseph G. Fucilla.