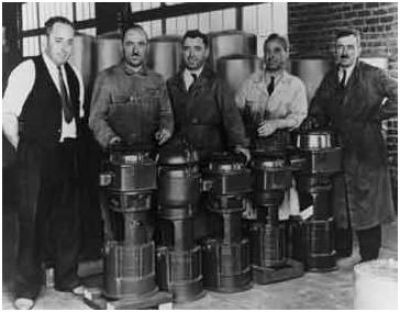 Hot tubs have become a symbol of relaxation and luxury in homes across the world. The discovery of heated water soothing physical ailments is not a new concept. Ancient cultures used natural hot springs such as the ancient Roman thermal springs and bathhouses as a health aid and a social gathering spot.

However, seven Italian brothers pioneered what we know as hydromassage. The story begins with Giovanni and Teresa Jacuzzi, both born in the small Northern Italian village of Casarsa della Delizia, about midway between Trieste and Venice. Married in 1886, the couple quickly started their family by welcoming eldest son Rachele. His 12 brothers and sisters followed.

Giovanni raised his children in an anti-war household during a time when Italy’s political climate was all but calm. Although the peninsula of Italy had been brought under one flag, the land and the people were not unified. Violence and social chaos were widespread. Because of this, Giovanni sent his male children to Germany to find work. As WWI began and Giovanni’s sons were of age to be conscripted into the army, he ordered them and his daughters to America. With 13 children to emigrate, the process took many years. But it was completed. While some of the Jacuzzi children waited in Italy for their turn to take the voyage across the sea, their siblings already in San Francisco’s Bay Area began to make a name for the family.

Rachele was the inventor of the family. First working for James Smith McDonnell, who would go on to found McDonnell Douglas, a major American aerospace manufacturing corporation, he then worked in the flying field of the 1915 Worlds Fair in San Francisco. While watching the planes at the exhibition, Rachele believed he could design a better propeller. And the Jacuzzi Toothpick Propeller was born. Everyone from the U.S. Airforce to Charles Lindbergh utilized his design. As WWII ended, so did the family’s military contracts for their propeller design. They decided to enter the airplane business. The seven Jacuzzi brothers developed the Jacuzzi J-7, the first airplane ever designed with a closed cabin. The U.S. Mail was ready to sign a deal with the brothers, but a crash that killed 4 men including Giocondo Jacuzzi forced Giovanni to forbid any more flying for fear he would lose another child. And the Jacuzzi’s aviation dreams were dashed.

Essentially broke, the family worked odd jobs to make ends meet while Rachele continued to develop another concept: a pump to move water with water. To sell his design in the Bay Area’s orange grove farming region, the family enlisted youngest brother Candido. Candido and the Jacuzzi water pump proved successful and the family was back in business again. In 1937, Rachele died suddenly of a massive heart attack. Candido quickly rose through the ranks to take over the family business and in 1941 he and his wife, Inez, welcomed their fourth child, a son named Ken. Ken contracted strep throat prior to his second birthday. In the 1940s, an ailment such as this could lead to greater, lifelong complications and Ken’s entire body was affected by the illness. One of the treatments recommended by doctors was hydrotherapy. Hydrotherapy worked well for Ken. Inez decided to have Candido look at the hydrotherapy equipment which led to the J-300 pump, a device that transformed any standard bathtub into a rejuvenating spa.

After convincing the rest of his siblings, Candido brought the Jacuzzi Whirlpool Bath to the consumer market. After a stint on the daytime TV show “Queen for a Day,” Jacuzzi became a well-known name. The product originally designed as a health aid became a symbol of luxurious living.

In 1968, Roy Jacuzzi, Candido’s grandnephew, introduced the Roman, the world’s first integrated whirlpool bath. This led to the first two-person whirlpool and then the indoor-outdoor hot tub, a gathering place for family and friends, much as it had been in the Roman days. The family decided to take the company public, but timing got the best of them and they eventually sold the company for $70 million.

The Jacuzzi brand continues to be a household name across the globe. The next time you draw a bath to relax in or relieve muscle pain, turn on the jets and offer a bit of gratitude to the Italian American Jacuzzi family.