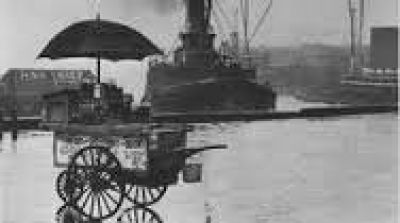 As the summer sun shines down on picnics and pool time, cool treats are abundant. Gelato, Italian ice, popsicles, and ice cream are enjoyed by children and adults alike. But where did these sweet treats come from? The invention of one of these favorite sweets is credited to an Italian American immigrant, Italo Marcioni.

Italo arrived in America in 1895 from Peaio, part of the municipality of Vodo di Cadore in the province of Belluno in the Veneto region of Italy. Typical of many Italian immigrants, Italo Marcioni Americanized his name to Marchiony. He first lived in Philadelphia before finding his way to NYC where he sold ice cream and lemon ice from a push-cart to Wall Street brokers and runners. Italo filled small liquor glasses with his popular confections for customers to enjoy. But the glasses were easy to break or be taken and washing each one was a chore. Then Italo had an idea. What if he created an edible cup that his ice cream could be scooped into? No washing, no waste and a convenient and tasty treat easily enjoyed by all. Italo baked waffles and folded and molded them into the shape of a cup while they were still warm. And the first edible ice cream cup was invented.

So popular were his waffle cups that soon his push-cart businesses expanded to a chain of 45 carts. Italo’s ice cream cups became known as “toots,” possibly derived from the Italian tutti or “all” as his customers were urged to “eat it all.” When the hand-made cups could not keep up with demand, Italo adapted the design of the waffle iron to create a device into which batter could be poured and baked and then mass-produced. Italo’s Italian ice cream venders became affectionately known as “hokey pokey” men, a derivation from their street cries of “Ecco un poco” (“here’s a little”).

Italo applied for a patent on his waffle cup-making device and was awarded a U.S. patent in 1903. In 1904, he established a wholesale ice cream and candy business in Hoboken, N.J. A fleet of horse-drawn wagons supplied retailers all over the metropolitan area with Italo’s treats.

When Googling the invention of the ice cream cone, one typically finds that serving ice cream in an edible dish originated in St. Louis at the Louisiana Exposition of 1904 and that a man named Ernest Hamwi was the inventor. Thanks to an article originally published by the Hoboken Historical Society and written by Italo Marchiony’s daughter, Jane Marchiony Paretti, we have the full story. As the legend has been told, Ernest Hamwi was a vendor at the Louisiana Exposition selling zalabis (a Syrian cookie that is like a thin waffle) who came to the rescue of his neighboring vendor who ran out of ice cream dishes. Hamwi rolled his waffles into a cone-shaped dish effectively holding scoops of ice cream for expo-goers to enjoy. Paretti offers one very important detail to the legend. That neighboring ice cream vendor was, in fact, Italo Marchiony selling his ice cream in his patented cups – which he ran out of. “That was when he turned to the waffle maker in the next booth and asked him to roll the waffles into the next best thing to a cup – a cone,” writes Paretti. The rest, as they say, is history.

Marchiony went on to produce ice cream wafers in shapes such as clam shells, fish and bananas, in addition to a simple rectangle, and continued in business until he retired in 1938. Italo died in 1954 at the age of 86.

As summer comes to an end and you find yourself mid-lick of your favorite flavor atop a delicious waffle cone, remember Italo Marchiony, the Italian immigrant who invented it.