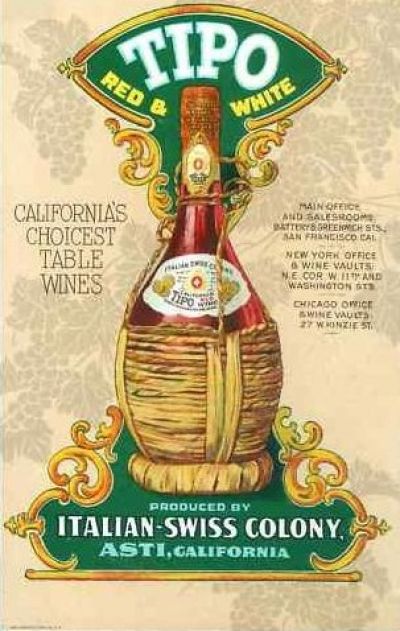 Italians were some of the first European explorers and settlers of California. While the majority of Italians settled in the urban centers of eastern California, many northern Italians came out west to the Pacific coast. One of these notable Italian immigrants was Andrea Sbarboro.

Sbarboro was a businessman by heart and by nature, founding and managing, in part, five mutual savings and loan societies in the late 1800s. Sbarboro then created a profit-sharing agricultural cooperative. The co-op’s focus would be grape-growing and winemaking. Sbarboro called his venture the Italian-Swiss Agricultural Association, named for the Italian Swiss immigrants from Ticino who settled in the area. In 1881, the immigrant from Genoa (about 75 miles southeast of Asti, Italy) founded Asti, CA, an unincorporated community in Sonoma County appropriately named after the Italian town, one of the finest wine regions in northern Italy.

Sbarboro’s intent was to establish a profitable enterprise that would employ some of the many Italians who had migrated to the San Francisco area. He immediately hired any Italian contadini from the wine-producing regions of Italy and those who understood grapes. He also sought after Italians who possessed initiative and ambition. Membership into his original cooperative was restricted to Italians. Originally, the cooperative was designed to allow the workers to eventually buy ownership, but that never developed, and it remained a normal joint-stock company and became the Italian-Swiss Agricultural Colony.

Asti, CA was a direct reflection of the vineyards of Italy. Entire families of pickers worked the fields, babies slept in crates by their mothers’ feet, young children learned to pick the ripened grapes carefully. The vineyard preserved old-world customs and habits creating a family-oriented structure.

At the end of 1887, the first shipment of grapes was sent to San Francisco. Overproduction significantly dropped the market price from Sbarboro’s expected $30 a ton to $8 a ton in addition to freight charges. Sbarboro answered the disappointing outcome with an urge to shareholders to build a winery to manufacture their own wines to protect the Colony. This step from grape-growers only to both grower and manufacturer of processed wines meant that Italian-Swiss Colony was one of the earliest American wineries to independently market and distribute its wines nationally.

Sbarboro’s next move was to entice a chemist turned pharmacist, Pietro Carlo Rossi, from Piemonte, Italy to become the head winemaker at Asti. Rossi was the first winemaker to work from a laboratory. He oversaw the entire process of production, maintaining the quality control essential for premium wine production and eventually became president of Italian-Swiss Colony.

In 1897, Italian-Swiss Colony constructed a 500,000-gallon subterranean wine tank – the world’s largest wine vault – which became a tourist attraction. Asti, CA was the largest dry-wine vineyard in the U.S. and its wines attracted world attention, winning many awards.

By the early 1900s, Rossi was still president of Italian-Swiss Colony and Sbarboro continued as secretary. Sadly, Rossi died in a tragic buggy accident at Asti on Oct. 9, 1911. Sbarboro went on to lead a crusade against prohibition. However, with prohibition imminent, Sbarboro relinquished control of the Colony in 1913 to the California Wine Association. The Asti property was sold to Rossi’s sons and Enrico Prati. In 1942, the Rossi’s and Prati sold their interests in Italian-Swiss Colony for over $3 million in cash. The company exchanged hands many times over the following years.

Andrea Sbarboro died on February 23, 1923 at the age of 83, a victim of influenza. He is credited for founding and operating a company that was largely responsible for the integration of California’s wine industry. A true success story, this Italian American immigrant not only profited, himself, from his venture, but created a structure that shared the wealth with his fellow countryman.