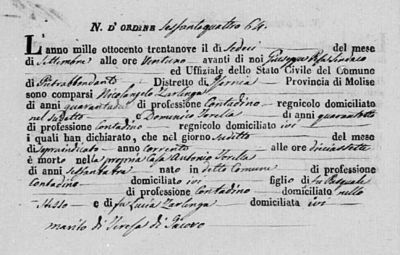 This month we are exploring Italian civil death records. We are doing a deep dive into a typical Italian death record so when you are looking at your own ancestor’s record, you will know exactly what to look for, even if you are not fluent in Italian. First, let’s look at what to expect when you start researching death records. Like birth and marriage records, death records are recorded in annual volumes in the Italian community where your ancestor died along with a copy recorded at the Provincial archives. In some locations, records will exist as early as 1809. The typical information found in Italian death records is the name of the deceased, date and place of death, age, names of parents and spouse (if married), and sometimes where the deceased lived and his or her occupation. In most cases, the cause of death is not shown. Although death records are recorded in the location where the death occurred, often the birth village was notified of an individual’s death that occurred outside of the deceased’s community, such as in hospital or while traveling. These records can be found in the book containing Atti Diversi or as an annotation on the deceased’s birth record (annotazione di morte or annotazione di decesso).

There is one caveat about the accuracy of death records that you need to be aware of. There may be errors or missing information because the witnesses were unable to provide accurate information.  This is especially true if the deceased was one of the last of a family to survive or died somewhere where he or she was not known well. In these circumstances, personal details provided may just have been speculation by the witnesses. It helps to look at the witnesses to determine how accurate their reports may be. For example, if they are family members, its more likely the information they provided is accurate.

A genealogical benefit of researching the death record of an ancestor who was born before 1809, is that his or her parents’ names may have been recorded and this will help you add one more generation of grandparents to your family tree. Another helpful clue found in death records is to see if the deceased parents were still alive when their child died. Look for “fu;” if you see this before the name of a parent, then you know that the parent was deceased before the child. This helps you narrow down the search for the parent’s death record.

I have found the best way to teach people how to read an Italian record is to use an actual record. This is the death record (Atto di Morte) of Antonio Torella who died in 1839. The handwritten words are shown in bold text. At first, you may struggle with reading an Italian official’s handwriting, however the more you study records, trust me, the easier it becomes. Please note that my translation below is not a word-for-word translation, but a more practical translation.

Next month we will start to explore marriage records, which provide a literal gold mine of genealogical information not only about the bride and groom but also of the parents and sometimes grandparents. However, they are, by far, the hardest records to study as many are handwritten and not in standard formats.