The Floating Nativity of Battaglia Terme 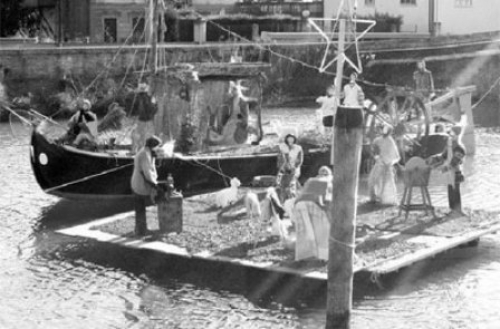 Battaglia Terme these days is an unremarkable, faded spa town on the fringes of the Euganean Hills in the Veneto, south of Padua. It had its early origins in the 12th and 13th centuries, first coming to prominence when its canal was constructed to carry the quarried stone from the hills to pave Venice and again at the beginning of the 20th century when it was renowned as having the best mud in Italy and people travelled there by rail for a cure.

Now, it's a rather sleepy place outshone by the nearby, rival spa town of Abano Terme, but nothing can eclipse its one recent claim to fame, the floating nativity scene on the canal at Christmas. Over the years it has grown in sophistication. The charming, wonky star of 20 years ago has been replaced by brighter energy-conserving models, with an angel hanging precariously from the rigging, and the extra effort in setting it all up means that we continue to enjoy it long after Christmas is over.

At the beginning of December work begins on the display. Vans park next to the canal, bringing shop dummies to be dressed in Biblical robes and set in poses on barges which are hitched to briccole or poles, which stand in the water, similar to those in Venice for tying up gondolas.

The first boat represents the stable, with Mary, Joseph and the infant sitting in a make-shift shelter in front of a glowing fire, which is reflected in the water. The second old boat (all are borrowed from the Museum of Inland Navigation), carries the shepherds and their sheep, made in the local primary school. Next in the chain of boats, are the three kings resplendent in their flowing colourful robes and carrying their gifts. Then, there are barges full of figures touchingly representing the locals with traditional crafts such as winemaking, spinning, knife-grinding, and clog making. All of the figures are life-size and form such realistic groups that cars travelling along the SS16 Padua to Ferrara road, parallel to the canal, often screech to a halt (as is typical of dangerous Italian driving) to look more closely.

Three years ago, someone managed to haul in the boat belonging to the three kings and steal the lot, figures and all. Sadly, the boat was left empty, apart from an indignant notice asking that they should be returned because this was a precious local part of Christmas. The magi did not reappear, but, undaunted, the good folk of Battaglia replaced them the following year with even more elaborate versions.

The passegiata at Battaglia Terme has an added air of festivity at Christmas when families stroll along the towpath to admire the flotilla, often nibbling the seasonal goodies from the nearby pasticceria.

The floating nativity is a rather surprising sight in wintry daylight, when the watery, colourless surroundings are punctuated with all of this joyful colour. At night it is absolutely magical; floodlit with shimmering reflexions in the gently lapping water. It is truly an embodiment of Peace on Earth and Good Will to Men