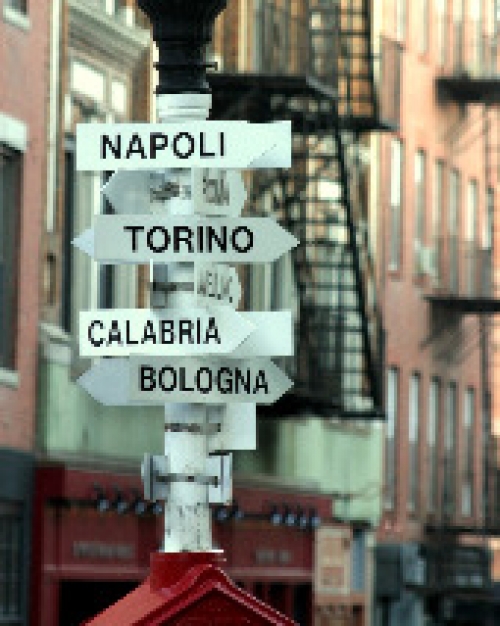 In the late nineteenth and early twentieth centuries, millions of Italians immigrated to America. This mass migration was one of the major reasons that US immigration laws were changed -- first with a literacy test in 1917, next in 1921 to restrict the annual number of immigrants and then in 1924 to restrict immigrants from specific countries.

It was too late, though, to change the demographic make-up of the country. The Italians had landed, and greatly influenced the neighborhoods where they settled by creating miniature versions of their villages from the old country. They traveled to major cities throughout the States -- seeking work and a better life -- and throughout America today, numerous cities retain some form of Little Italy.

In the early 1800s, Italian immigrants who made their living as sailors settled in Baltimore along the Inner Harbor. The second wave of immigrants -- some heading west to seek their fortunes during the tail end of the California Gold Rush -- stopped in Baltimore to prepare for the long journey across the country. During the 1880s, Baltimore was a growing city, and many immigrants made the decision to stay and work there. Some worked in construction, helping to build the city; some become fruit vendors and importers of Italian food and others were tailors, shoemakers and barbers. Over the years, second and third generations became doctors and lawyers.

The Italian community is still vibrant today with a large Italian American population and a very active Order of Sons of Italy in America Lodge. Numerous feasts -- two of the most popular are the Feast of St. Anthony in June and the Feast of St. Gabriel in August -- an open air film festival every Friday night in July and August and bocce tournaments are some of the annual events. Parish dinners, an Italian Golf Open, a Columbus Day parade, a tree lighting ceremony with a choir and an Italian-speaking Santa Claus and close to 25 Italian restaurants attract over seven million visitors to Baltimore's Little Italy each year. For more information visit www.littleitalymd.com.

Immigrants from Genoa were some of the first Italians to settle in Boston, making a living by selling produce, cheese, olive oil and wine. (Pastene Companies, Ltd. started with a pushcart in 1848 and is still family owned and operated.) The turn of the century brought an influx of Italians from the south. Many became fishermen, substantially adding to the economy of the community with 310 fishing boats in 1909. Some became importers -- Prince Pasta Company ("Wednesday is Prince Spaghetti Day") was founded in 1912. Other immigrants worked in construction as masons, carpenters and metalworkers. By the 1920s, doctors, dentists and other professionals were common occupations.

The North End, now estimated to be about 40 percent Italian American, still imparts the culture and heritage of the Italian immigrants. Around 80 Italian restaurants and market tours of Italian food, wine and beverage purveyors are popular tourist attractions. Numerous feasts and processions are held throughout the year and two of the largest -- St. Anthony's Feast, first celebrated in 1919, and the Fishermen's Feast, first held in 1910 -- are both in August. For more information visit www.northendboston.com.

North of Manhattan, an area about eight by nine blocks large is called the Belmont section of the Bronx, but more commonly referred to as the "real Little Italy" in New York. In the 1890s, Italian immigrants moved from lower Manhattan to the tenement buildings of the Bronx. They set up shops selling produce, pasta, cheese, salumi, bread, pastries and other products; and many of those establishments are still doing business today. Merchants line Arthur Avenue and the Arthur Avenue Retail Market, established by Mayor Fiorello LaGuardia in 1940, provides the atmosphere of Italy.

The Enrico Fermi Cultural Center and the Belmont Italian American Playhouse host numerous special events, and the Bronx Zoo and New York Botanical Garden are close by. Many Italians still live and work in the area and a diversified group of students from Fordham University -- within walking distance -- also live in the area. For more information, visit www.arthuravenuebronx.com.

The early Italian settlers in Chicago were a small group from northern Italy who arrived in the 1850s and established themselves as entrepreneurs by selling produce, opening restaurants and stores and working as skilled artisans. Thirty years later, Chicago had become one of the fastest growing cities in America, and the need for laborers attracted Italian immigrants from southern Italy. Immigrants from various regions settled in different areas of Chicago -- spreading east, west, north, and south of the city. Taylor Street, in the Near West Side, became the hub of the Italian community, most notably because of Hull House, established to educate and help assimilate European immigrants, and Mother Francis Cabrini, who started a school and founded two hospitals.

Although parts of the Italian neighborhood were torn down when road construction and the University of Illinois at Chicago were completed by the 1960s, numerous Italian and Italian American clubs and organizations helped maintain a strong sense of community. The Shrine of Our Lady of Pompeii, established in 1910, and the Italian American Sports Hall of Fame add more culture and heritage to the area, which still has a large Italian American population. Major events include an Italian Street Festival in June and Taylor Street Festa Italiana in August. Italian food and regional specialties from the area's restaurants, entertainment, merchandise from Italy and children's activities are part of both celebrations. Festa di Tutti I Santi, a fundraiser for The Shrine of Our Lady of Pompeii, is held in August. More information visit www.littleitalychicago.com.

By the mid-1800s, a small group of Italian immigrants had arrived in Cleveland and were working in various occupations -- in both professional and skilled labor -- as bookkeeper, boot maker, gardener, carpenter, steelworker and stone mason. Twenty years later, Italians were owners of restaurants, saloons, produce stands and grocery stores. In the late nineteenth century, more Italian immigrants traveled to Cleveland, most now having local ties, and many opened businesses to service the burgeoning Italian population. They made their homes in several areas around Cleveland (Big Italy, Collinwood, Murray Hill and Kinsman), but kept their ties close to their homeland. In 1912, the Italian communities had more than 50 local societies to help them assimilate.

On the east side of Cleveland, in the Murray Hill community -- almost all Italian -- many were skilled in lace making and needlework; and a marble works and bank opened in the neighborhood. Eventually, Murray Hill became Cleveland's Little Italy, and today remains strongly Italian. Red, white and green is proudly displayed in all forms and numerous restaurants, cafes, bakeries, specialty shops and galleries offer a wide variety of Italian food and merchandise. In 1994, the Little Italy Redevelopment Corporation was formed to manage improvements and direct growth. Festivals and events are held year-round, including Opera in the Italian Cultural Garden, an Italian film festival, Art Walk, Italian classes, neighborhood walking tours and a Columbus Day Parade. In August, the Feast of the Assumption, the only fundraiser for Holy Rosary Catholic Church, brings thousands to Little Italy with food, Italian merchandise, live music, and a procession in honor of Mary. More information visit www.littleitalycleveland.com.

Janice Therese Mancuso is the author of Con Amore, a culinary novel; and founder of Thirty-One Days of Italians, an educational program to promote Italian and Italian American history, culture, and heritage. For more information, visit http://home.earthlink.net/~31italians, www.jtmancuso.com, or email at This email address is being protected from spambots. You need JavaScript enabled to view it.

View the embedded image gallery online at:
https://www.lagazzettaitaliana.com/heritage/7614-little-italy-italian-immigrants-influence-america-part-1#sigProId4dcee317d8
More in this category: « The Christmas Season in Italy Starting Your Family History Project »