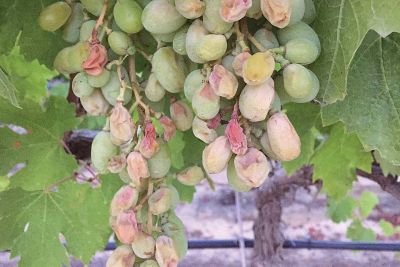 Climate change continues to be a prominent issue in American and world politics. Whether people believe it or not, there are phenomenon happening in all areas of the world that are caused by unprecedented changes in global temperatures. Italy is no exception and as summer temperatures set record highs with passing each year, wineries are directly affected by these changes.

Unprecedented weather patterns endanger Italy’s most famous wineries. Wineries are losing their essential tool – grapes, specifically white grapes, to record-setting heat waves.  According to a 2018 Washington Post article, grapes are getting “sunburned” in northern Italian wineries, an issue that has not become relevant until the last decade. According to the article, “white grapes have become a telltale of gradual temperature increases...” because farmers witness more disease, faster ripening and singeing of white grapes.

Europe’s changing climate leaves uncertainties for future Italian wineries. Italy is known for its acres of wineries where Pinot Grigio and other famous wines are distributed throughout the world. However, warmer weather patterns in Italy will cause “wine country” to be shifted to a new area of Europe, most likely north of Italy and France. According to the Washing Post, large producers of wine are buying land in southern England “where the climate now resembles the French Champagne region of the 1970s.” To cope with the growing problems, grape farmers have established new harvesting and growing techniques. According to the Washington Post, one Italian winemaker “moved its vineyard to a higher elevation” and another winemaker created an underground irrigation system.

It is not clear how much time Italian wineries have until they cannot produce their usual top-selling wines for global export. As drastic weather patterns and events become more common, their time may be up soon.