The Olive Harvest in the Veneto 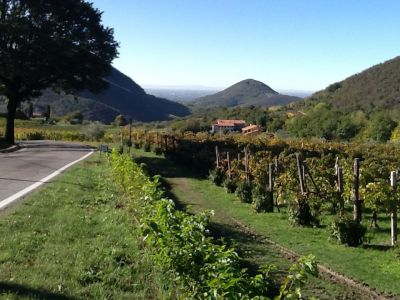 Here’s an unusual bit of vocabulary for all would-be Italian speakers: frantoio. This word means not only an olive press, but the farm which produces the olive oil. It’s a word which comes up quite often at the time of year when the olive harvest takes place.

The volcanic region of the Colli Euganee in the Veneto produces high quality extra virgin olive oil which is certified DOP (Protected Designation of Origin). There are several producers, of which probably the best is the Frantoio di Valnogaredo which can be found in the lovely, small village of the same name, a place where you could easily be in the 18th century instead of the 21st. Valnogaredo has an elegant 17th century villa once owned by the Contarini family. What was once the barchessa (another useful piece of vocabulary), an adjoining out-building for housing carriages, agricultural machinery and a barn, is now an independent frantoio, bought and run by the Barbiero family since 1960. The present owner’s father worked for the Count in the 1940s.

In late October, the entrance is filled with crates of olives, some with vessels rather like milk churns on top, along with a piece of paper with the grower’s name. These are from local producers who bring their olives here to be pressed and, for a small payment, can later take their own oil away or receive a blend of all the oil produced.

A woman was selecting a few of each colour from the crates and putting them in a paper bag. I asked her what she was doing. She told me they were for salting for her own personal use. By coincidence I met her again, after my visit to the frantoio when we stopped at a delightful local trattoria, Al Cantinon, for lunch. We were served the new oil with home-baked bread as an antipasto by the same woman. It turned out that she is related by marriage to the Barbiero family. Small world.

Out in the fields, olives are gathered by collecting them from a ground sheet spread beneath the trees whilst a machine gently shakes the branches to release the fruit. Black and green olives are not separated: in fact, many olive trees, especially the leccino variety common throughout Italy, produce both colours on the same tree.

The rasara olive is a special variety grown in the Euganean Hills and produces the only oil made from a single type of olive: all the others are blends. It has a distinctive flavour (almond and artichoke) and is an intense golden green. Blended oil is a paler greenish yellow.

All olives are milled within 24 hours of harvesting. This year, says Paolo Barbiero, has been a bad year not only for olives but for most fruit, including grapes. For this reason, the massive old granite millstones will not be used. Instead, the smaller quantities of olives are poured into the centrifuge after washing and the oil is produced by estrazione.

Entering the frantoio is like walking into a dense haze of olive oil vapour which you can feel and smell. The olives travel on a conveyor belt to be washed and any leaves or debris are removed. They then disappear into bins with rotating paddles where, at a constant temperature of 27 degrees, the olives are crushed until the brilliant green oil comes out in a steady stream at the other end. The residue, looking like the mixture for chocolate brownies, is carried outside to waiting trucks to be used for sansa, a low-grade oil which can be used for cooking or other purposes. In the past, another low-grade oil known as lampante was made for burning in oil lamps.

It’s all true what you hear about the beneficial effects of olive oil on the human body, because it is so easily absorbed. Signor Barbiero himself is an advert for its rejuvenating properties, claiming to be 100-years-old. That should be taken with a good pinch of salt, I think, but even if that particular fact isn’t true, everyone knows about the health and longevity of Italians and that must be in large part due to their consumption of olive oil. It helps the absorption of 80% of nutrients into the body, as opposed to 20% for other green foodstuffs.

In order to be classified as extra virgin, the oil must have certain characteristics and meet carefully calculated criteria judged by a panel to score between 6.5 and 8.5 on a scale which takes into account acidity, oxidation and flavour: bitterness, piquancy and herbal. Other oils which fall outside these criteria may not be called extra virgin. The family takes its product seriously and welcomes all visitors from school parties to agricultural students to help in the understanding and appreciation of olive oil production. It’s a wonderful place to learn, surrounded by views of conical hills and neatly striped vineyards bright with autumn colours.

The Frantoio di Valnogaredo also has a shop where passing tourists and regular shoppers can buy bottles and cans of oil, flavoured varieties, jars of vegetables preserved in olive oil, and beautifully packaged fruit cakes made with their own olive oil. There is a mail order service too. Needless to say, I now have a store of very original presents which would be almost impossible to find elsewhere.

This article first appeared in Italy Magazine in November 2017

View the embedded image gallery online at:
https://www.lagazzettaitaliana.com/food-and-wine/8653-the-olive-harvest-in-the-veneto#sigProId03368c47c9
Tweet
More in this category: « The Two Stolen Pernigotti Chocolates Coffee is the New Racket in Italy »