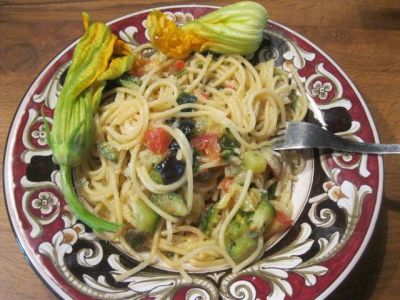 In 1971, Alice Waters basically launched a California version of the Mediterranean diet when opening Chez Panisse in Berkeley, promoting farm-to-table, fresh, local ingredients. Although I’d studied at UCB in the early 1970’s, I finally tried out Chez Panisse just a couple years ago, although I was rather puzzled by its rave reviews. The food was good and fresh but not “special” for me; daily fare here in Italy wins. Every Italian meal stars the Mediterranean diet, reflecting the healthy living habits of people bordering the Mediterranean Sea, including Italy, France, Spain, Greece, Portugal, Morocco, Cyprus, and Croatia. The diet varies by region – and definitions vary, too – but incorporates seasonal vegetables and fruits (minimum of five portions a day), nuts, legumes, grains, fish, starches (bread and pasta…pizza!), limited amounts of lean meat (and possibly not red meat), few sweets, moderate amounts of dairy products (mostly cheese and yogurt) and, logicamente, olive oil. One Mediterranean diet recommendation includes five glasses of red wine a week. I can hear the glasses clinking now. The Mediterranean diet not only entices for its refreshing flavors but also for its appeal to the eye, often showcasing kaleidoscopic colors in food pairings. In fact, words don’t do it justice.