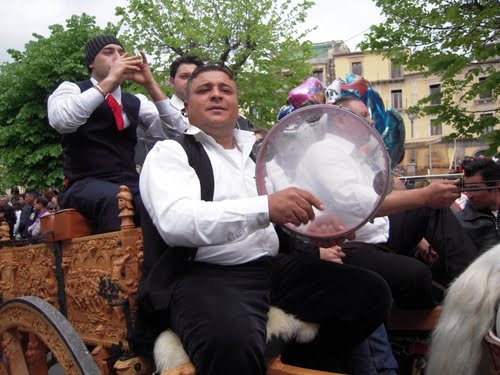 Italians love to have fun as well as work hard, and they also certainly love to celebrate with festivals. Most towns and villages celebrate their patron saints with festivals in their honor. With Italy's love for food and wine, festivals often revolve around these themes.

Since Italy is one of the leading producers of cheese in the world, cheese festivals are part of the culture in Piedmont, Tuscany, Umbria and Sicily. Italy has been producing cheese for over 3,000 years, when the Etruscans first settled in central Italy and made cheese from sheep's milk. Today, 37 cheeses have PDO (Protected Designation of Origin) status and numerous smaller local varieties are produced in many towns and villages.

The most well-known and largest of the cheese festivals in Italy is the Bra Cheese Festival in the Piedmont region. Held every two years, in the odd years, this celebration occurs on the third weekend in September. Organized by the Slow Food Movement, the event attracts 150,000 people from all over the world. During the weekend more than 1,200 kg of mozzarella and 400 kg of Swiss cheese are consumed.

The event is not simply a feeding frenzy, but also includes cooking classes and workshops, as well as organized trips to restaurants, mostly arranged through advanced reservations. Multiple exhibit areas allow for tasting of many varieties of cheese and also a wine-tasting area is part of this festival. After all, what is cheese without wine?

Each year on the first Sunday in September, the town of Pienza (province of Siena) in Tuscany is the host to the Pecorino Cheese Festival. After an elaborate procession and flag-throwing competition, teams from the four different neighborhoods participate in what is known as Fiera del Cacio. Children take turns rolling a wheel of cheese toward a target in the main square of Piazza Pio II.

Easter Monday becomes the day for cheese celebrations in the small hilltop town of Panicale (province of Perugia) in Umbria. The cheese rolling event is known to the locals as Ruzzolone, which means "rolling the cheese," and originated during Etruscan times. A nine-pound round of pecorino cheese is launched via a leather strap which is wrapped around it. The winner is the one who rolls his cheese to the finish line with the least number of strokes.

Between the cities of Caltagirone and Siracusa is Vizzini (province of Catania), the home town of writer Giovanni Verga. Each year during the last weekend in April, Vizzini celebrates "Sagra della ricotta e del formaggio." Ricotta cheeses originated in Sicily, and this event celebrates their local product.

During the festival horses are dressed elaborately as they pull decorated carts. Local Sicilian men model native costumes as they play musical instruments and march about the center of town. Flag-throwing is part of the big event and of course, everyone waits for the food. Ricotta producers set up stations outside for all to observe the cheese-making process, and of course ultimately to taste the sweet, warm dairy product. All kinds of sweets made with ricotta cheese are available, including cannoli, tarts, ricotta arancini, cheesecake, and much more.

No matter where you go in Italy, the local people take pride in what they produce in their regions, and the cheese festivals are another way to demonstrate that and have a good time too. On your next trip to Italy, try to coordinate your schedule to be able to share the experience of an authentic cheese festival in one of these towns. It just might be the highlight of your trip!