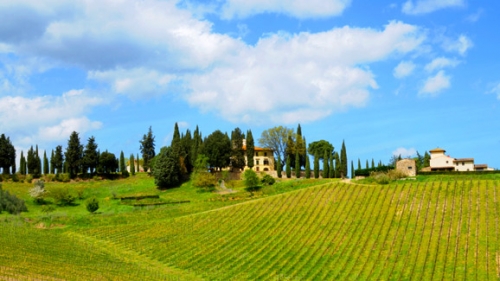 Italy is famous the world over for its wines, so even if you are not a serious wine enthusiast you will surely appreciate the beautiful scenery and tradition of a trip through the fine producing wine regions of Italia! Almost every region in Italy produces wine. In fact, Italy claims 20 major growing regions, including the islands of Sicily and Sardinia. These 20 wine regions are generally classified into four geographical categories - the northwest, the northeast, central Italy, the south and islands. Each of these regions produces a unique style of wine. Many of these varieties are so climate specific that they cannot be transplanted to another region. That is why wines produced from each of these regions have their own distinctive aromas.

It also boasts an astonishing number of grape varieties, growing most of the world's major red and white grapes. Native varieties like Sangiovese, Barbera and Trebbiano grow throughout the country; while others like Nebbiolo, Verdicchio and Lambrusco, for example grow only in certain regions.

Wine making is an occupation between the regions that aggressively compete against each other in the marketplace. But which regions are the best? In addition, what elements are included in the great wine regions that put them at the top of many lists? Let's look at some of Italy's great wine producing areas and the wines that they produce that make them so popular.

Accounting for around 17% of the Italy's total wine production, Puglia produces more wine than any other region in Italy. This area is also known for producing some of the finest grapes in Europe, often used for making Vermouth, and sometimes shipped north to France to enhance French wines. Puglia is home to more than 25 DOC wines, including Primitivo di Manduria. Besides its production of the best Primitivo wines, Puglia also produces a powerful red wine called Salice Salentino, known worldwide for its quality and reasonable prices.

The wine-producing region of Friuli lies in the northeastern Italian province of Friuli--Venezia Giulia. This area shares a border and a turbulent history with Slovenia. Although not so widely known, it is the third most important of Italy's wine producing regions after Piedmont and Tuscany. Famous for blending a remarkable number of varietals into their local blends, wine makers in Friuli proudly produce exceptional wines time and time again. The quality of its wines is among Italy's best. Often compared in quality to Italy's famed Tuscan wines, Friuli wines proudly stand apart with one major difference: its wines are mostly white. Some of the best white wines in Italy are produced here as this area has long been internationally acclaimed for its fragrant, elegant white wines. The most notable white of the region is Tocai Friulano. Other white grapes of the Friuli-Venezia Giulia region include Chardonnay, Pinot Bianco, Pinot Grigio, Reisling Italiaco, Riesling Renano, Sauvignon Blanc and Malvasia Istrinia. Friuli also has two other important grape varieties: Schioppettino, also known as Robolla Nera, is one of the most interesting red varietals of the Friuli wine area.

While Lombardy is not famous for its grape growing, the area is still a respectable winemaking region that relies mostly on six noble grape-varietal zones to produce wines that are mostly sold in local taverns along the Po and Ticino Rivers. Of the six established grape-varietal zones, three stand on their own as noteworthy producers of Italian wines: Oltrepo Pavese, Valtellina and the province of Brescia. The Valtellina region is known primarily for making wine from the Chiavannesca grape, which is the local version of Italy's famous Nebbiolo grape. The province of Brescia, on the other hand, is known for successfully producing red, white, and sparkling wines that have garnered a reputation of quality and distinction outside Italy's borders.

This renowned region produces more prize-winning wines than any other region in Italy. Home to 46 DOC and four DOCG growing areas, Piedmont has consistently produced some of the most highly regarded varietals, vintage after vintage. Reds with rich, complex flavors make up most of the wine output of this high-altitude region near Italy's border with France, like the Nebbolio, which is a rich and tannic grape and the most famous grape here. It is the grape of Barolo and Barbaresco as well as being bottled under its own name or in combination with Dolcetto or Barbera in proprietary blends. Barolo, Barbaresco and Barbera are used to make strong red wines that pair wonderfully with the hearty, rich cuisine that is famous throughout this region. Another point of pride for Piedmont is their Asti Spumanti, a champagne-style sparkling wine made from the Moscato grape.

In recent years, winemakers on the island of Sardinia have drastically cut the volume of production and reduced the number of vineyards resulting in a vast improvement of wine quality. White wine production outnumbers red wine by nearly two to one in the rolling hills of the island's main vineyard area, Campidano. The fertile soil here is perfect for growing Moscato, Monica, and Malvasia grapes. Moscato from the area can be either sparkling or still, but it is always considered sweet while the most famed dry white is undoubtedly Malvasia, which flourishes on the west side of the island. One of the most important red wines from Sardinia is Cannonau, which has a close similarity to Spain's Granacha. Typically, these Spanish-style grapes are used to produce wines with mammoth-sized strength and flavor, but when they are produced in Sardinia, they are toned down to much more enjoyable proportions.

Sicily comes in second to Puglia for producing the most wine in Italy, though they are in first place when it comes to the actual number of vineyards in the region. Because of its hot climate and volcanic soil, Sicily is home to countless vineyards, many of which produce only simple table wines. Grapes that are grown in Sicily play a large part in creating sweet and flavorful dessert wines. Of the better vintages, the best-known wine is Marsala, a dessert wine produced in both amber and ruby tones. Other famous wines from this region are Port, Sherry and Madeira, which are often accompanied with the memorable Sicilian pastries and desserts. Worldwide, it is through these concentrated, small-portioned dessert wines that Sicily has garnered its fame and recognition. Also enjoy the ruby red Nero d'Avola blends. Nearly 90% of the total DOC wines made in Sicily are dessert wines, but this is not to disregard the superb red and white wines produced on the island.

The lush rolling hills of Tuscany exist as a supreme example of an Italian wine making region. For centuries, wine makers have flourished in the sun kissed vineyards of Tuscany. The coastal breeze from the Tyrrhenian Sea cools the noble grapes, creating an ideal growing environment, with picture perfect vineyards and truly world-class wines. The most prolifically grown grape in Tuscany is Sangiovese. Wines that are made from Sangiovese are enjoyable and memorable, but they lag in popularity behind Italy's famous Chianti wines, arguably the most famous. Chianti and Chianti Classico wines are well known and appreciated all over the world. The region is also home to the famed blends called Super Tuscan, which are made by blending Chianti grapes with small amounts of Cabernet Sauvignon or Merlot grapes. Though untraditional, these wines have become very popular because of the softness the French grapes bring to the wonderfully intense Italian wines. Other famous wines produced in Tuscany are Brunello di Montalcino and the notable dessert wine, Vin Santo, or Holy Wine. This Italian delicacy is made from the Trebbiano grape, after having been left out to dry until the start of Holy Week, at which point it is made into wine. With more than 30 DOC and 6 DOCG wines, Tuscany remains to this day, one of the foremost wine making regions in the world.

This region closely resembles Tuscany and it produces some remarkable wines, both red and white. Not only that, but personally I have come to really love and appreciate the beauty and charm of this remarkable region for its picturesque towns and villages and spectacular settings. The wines produced in Umbria, though limited in quantity, are exceptional in quality; appreciated and envied throughout the world. The most popular of these outstanding Italian wines are the wines made in Orvieto. Orvieto wines are some of the best-known Italian whites in the world. Made from a blend of four or five grapes, you can find these traditional white wines all over Italy and the rest of the wine world.

Veneto is one of Italy's most renowned wine-producing regions, recognized for producing a large quantity of wines that are famous for their superb quality. With more than 20 DOC growing zones and a large number of sub-growing zones, the wines of Veneto are very much appreciated and enjoyed the world over. Three of Veneto's most notable wines are Valpolicella, Bardolino and Soave. Also famous in Veneto is the sparkling wine, Prosecco. Grape quality aside, winemakers from the region are known for their dedication to craft, helping to create Italy's first school for oenology and vine growing in 1885. Veneto was also the first wine region to introduce the Strada del Vino (Wine Road). This road became Italy's first wine touring road featuring signs with information about local vines and grapes and the wines that use them. One of the region's provinces and one of my favorite cities in Italy, Verona, is thought to have been used to grow grapes since the Bronze Age.

To ensure the wine you are buying is a premium wine look for the Denominazione di Origine Contollata (DOC) or Denor Controllata et Garantita (DOCG). The DOC system covers over 250 different regions in rules for the types of grape grown, methods of production, and yield, alcohol levels and ageing to be used. A higher - quality category, Denominazione Controllata e Garantita (DOCG), helps define the very best wines in Italia. You will find the official seal impressions DOCG stamped on a light pink paper strip that covers the top of the bottle.

Peter D'Attoma is the president of DaVinci Custom Travel & Tours. He has nearly 30 years of planning and designing premium independent, custom and escorted tours of Italy for individuals, groups and incentives. For more information call 330-633-2292 or visit www.davincicustomtravel.com.

Tweet
More in this category: « Wine and Cheese, the perfect pair Wine 101: An interview with John Williams »