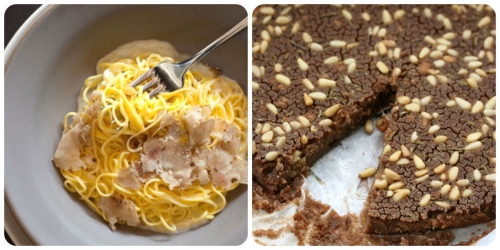 If the best time for food fairs in Italy is the fall season, then October is the best month to pick chestnuts. The mild days are still long and the forests are painted with warm, amber tones that render even a simple walk, an amazing experience immersed in nature. All you need is a pair of gloves, a cloth sack and you're ready to pick chestnuts. By the end of the day you're bound to have a bag full of the best autumn fruit. However, if you have no desire to hike through the woods searching for chestnuts, you can always turn to the chestnut festivals in a town near you where you can enjoy chestnuts in every form.

Chestnut sagre (food fairs) offer everything from caldarroste (roasted chestnut kiosks), to castagnaccio (cake made from chestnuts, pine nuts and raisins), chestnut flour, chestnut marmalade, chestnut tortelli and ravioli pasta, and every other kind of food that involves chestnuts. These types of food fairs are the best way to try new and traditional dishes. Furthermore, given that these food fairs take place outside the city, it's a perfect way to discover a new town with a rich history..

Although chestnuts play an important role in every region's cuisine, they are especially prominent in the regions of Campania, Sicilia, Lazio, Piemonte and Toscana. Since chestnuts are rich of starch, up until the 1950s in many mountain towns chestnuts played a major role in the daily diet.

In the last decade, chestnuts have made a comeback in Italy, in fact, many old chestnut groves have been subject to a renewal process, and the chestnut market is on the rise, which is a good sign in today's troubled economy.

Chestnuts are the principle ingredient in the castagnaccio cake. Since this cake is found in many regions like Veneto, Piemonte, Lombardia and Toscana, it is very hard to determine the origin of this cake, especially since each region makes the cake in a different (but delicious) way. However, throughout the years, castagnaccio has become the typical dessert in Tuscany, even its history is very closely tied to this region, especially to the city of Siena. Like many traditional recipes, castagnaccio originated amongst the poor peasants, since chestnuts are extremely abundant in the countryside. The origin of the cake dates back before the Renaissance, since already in the 1500s, it was a very known and popular cake; even an Augustinian priest of that time wrote about this famous cake in one of his writings. Yet it wasn't till the 1800s that the Tuscans began to introduce the cake to the rest of Italy. It was then that the cake became enriched with other ingredients such as raisins, pine nuts and rosemary. Castagnaccio usually comes with various sides to enrich the flavor, from ricotta cheese or chestnut honey, to Novello wine or other sweet wines like Vin Santo. Legend has it that the rosemary leaves used in the cake consist of a potent love elixir and if a young woman offers the cake to a young man and eats it, he would immediately fall in love with her and ask her to marry him.

If you find yourself in Italy during this beautiful autumn season, it is a must to try anything chestnut based, especially castagnaccio, but be careful of its special powers.

Tweet
More in this category: « How to Order Gelato in Italy The Facts and Myths of the Seven Fishes »