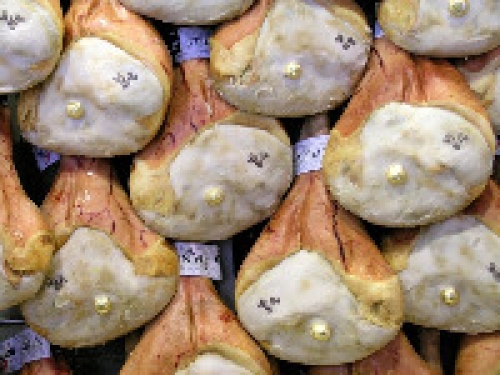 In Italy, the summer season offers several interesting events, which are a good trade off between tradition and celebration. One of these, the Prosciutto di San Daniele festival, occurs in the Friuli-Venezia Giulia region in the end of June.

The small town of San Daniele and the hills surrounding it are only 35 km away from the Adriatic Sea, but not so far from the Alps. Therefore, this allows for a special union between warm breezes and cold north winds. The combination of the drainage properties of the local soil and the soft and constant ventilation makes for a unique and ideal maturing process.

History says that it was the Celts who first made use of salt to preserve pork, and traces of their activity were found in Friuli along the river Tagliamento. Romans also appreciated the taste of dry ham, and some two thousand yeas ago built a villa of sorts at the very top of the hill overlooking the trade road. Prosciutto di San Daniele became well known in Middle Ages and was demanded on many aristocratic tables around Europe.

Up until Word War II, the ham was made only from local black pig, but due to the increasing demand, pigs from other regions began to be used.

During the 1960s, a consortium was formed to protect the brand. At that time it was decided that Prosciutto di San Daniele could be made only in one of 30 approved manufactures located in San Daniele, with use of pork supplied by some 5,000 authorized pig farms.

The maturing process is supervised by the consortium, which guarantees the quality with the label PDO (Protected Designation of Origin).

Prosciutto can be aged for over two years, but the standards for Prosciutto di San Daniele require the full process to take at least 13 months, including a minimum of 8 months of air-curing. No preservatives are used during the whole production process, only salt, so the final quality of the ham depends solely of the air surrounding it.

According to tradition, Prosciutto di San Daniele is sliced as thin as possible, which is very important in order to bring out the whole taste of the ham.

It is quite often served in restaurants as an antipasto, supported either by the slice of bread or breadsticks, and is also sometimes part of salad or wrapped in fresh mozzarella. The vegetables from the salad cannot be overly powerful so as not to disturb the taste of the proscuitto. It is for this same reason that Proscuitto di San Daniele should be accompanied by a dry wine that is not too sweet.

Tweet
More in this category: « Let your stomach lead the way Italy and Chocolate - The Perfect Match »