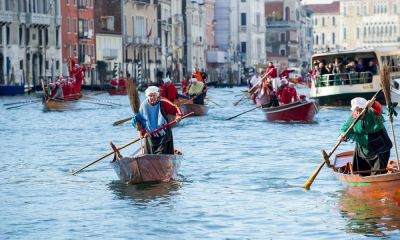 Jan. 6: Epiphany Regatta, Venice. In a city that holds hundreds of regatta races throughout the year, this one stands out, as it features 50 men dressed as La Befana. The rowers paddle up the Grand Canal and toward the Rialto Bridge, competing to be the first to reach a giant stocking that hangs from the bridge.

Jan. 16: The Lighting of the Focara, Novoli, Puglia. Celebrations of St. Anthony, the patron saint of Novoli, are known as the “days of fire” because, on January 16, they culminate in the lighting of the Focara, the biggest bonfire in the Mediterranean region. Its base is 20 meters in diameter and its 25 meters high and constructed with over 80,000 vine branches. The event attracts thousands of visitors each year.

Jan. 18-21: Roma Sposa, Rome. The National Show is a 4-day event showcasing product from the wedding and bridal industry.
The event is held in the Palazzo dei Congressi.

Jan. 27: Carnevale di Viareggio, Viareggio. Since 1873 people, people have flocked to the Tuscan coastal city to party during Carnevale.
This lively, fun-loving venue is one of Europe’s most famous and largest Mardi Gras-style festivals.

Jan. 27-Feb. 13: Carnevale di Venezia, Venice. First held in the 11th century, this carnival quickly became the famous symbol of the floating city. Masks and costumes prevail making this festival one of the most famous in the entire world.