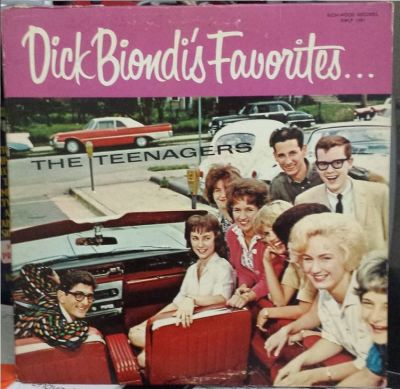 Richard Orlando Biondi was born in Endicott, NY in 1932 to Rose and Michael Biondi, a homemaker and a fireman. Growing up in the Italian neighborhood known as the Nob, Dick described himself as a kid who was always yakking. A devout Catholic, he intended to enter the priesthood.

But things changed when eight-year-old Dick, while spending the summer at his grandparents’ home in Auburn, NY, discovered a local radio station. He would stand and watch the announcer until, one day, he was invited into the studio to read a commercial. When he returned home, his family announced, "We heard you on the radio!" That is when Dick's dream was born.

Dick began his career playing Race or Sepia records and soon discovered rock and roll. At his early record hops, he introduced Elvis, Jerry Lee Lewis, Bobby Darin, and Paul Anka and went on to promote many artists' careers. Dick's dream came true at superstation WLS in Chicago where his rock and roll persona, The Screamer and The Wild I-Tralian, made him the number one DJ in America. It was at WLS in February 1963 that he introduced and played the first Beatles record to be heard on the radio in the U.S. and later introduced the Beatles and the Rolling Stones in concert.

A proud Italian American who kept his real name throughout his career, Dick was a role model to the kids who adored him. He was exciting, fun and goofy, but he also had a serious side. With a heart of gold, Dick never tired of using his voice for good. The annual Dick Biondi Toy Drive, a 36-hour marathon which brought joy and gifts to needy children, is featured in the film.

The official and authorized “Dick Biondi Film” documentary is the passion project of former fan club president Pamela Pulice who met Dick in 1961 and has remained a lifelong friend. Since March 2014, Pam and her team have interviewed Biondi, his friends and fans and notables in the broadcast and entertainment industry, including Frankie Valli, Brian Wilson (Beach Boys), Paul Shaffer (Late Night With David Letterman), Tony Orlando, Walt Parazaider (founder of the band Chicago), Jim Peterik (Ides of March and Survivor), Dennis Tufano, Carl Giammarese (The Buckinghams), comedian Tom Dreesen, and Ron Onesti of Onesti Entertainment to name a few. In the competitive, youth-oriented, ever-changing radio and music industries, Dick Biondi has endured to become one of the most influential and best loved radio personalities of the 20th century.

We are excited to share Dick's story with you and invite you to learn more about Dick Biondi's place in rock and roll. The film is in post-production and slated to be released at some point in 2021. To learn more, visit www.dickbiondifilm.com.

View the embedded image gallery online at:
https://www.lagazzettaitaliana.com/entertainment/9612-the-dick-biondi-film#sigProId2d1ec466a8
Tweet
More in this category: « Vacation Under the Sicilian Sun Buffalo’s Sports Headliners and Insights »