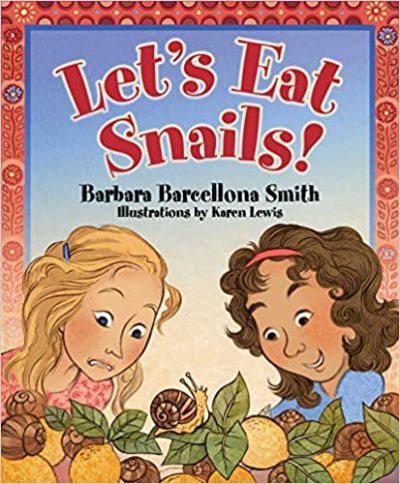 “Let’s Eat Snails!” gleans from Barbara Barcellona Smith’s crazy Italian American childhood and takes all-aged readers on a culinary adventure. In addition to whetting children’s appetite for new and unfamiliar dishes, “Let’s Eat Snails!” offers a cultural window into the lives of ethnic neighbors who comprise a large portion of our American society. This book is a metaphor for all sorts of cultural things we are afraid to try, then try and find we enjoy! Or as Barbara’s paisana publisher, Suzanne La Rosa, puts it, “Let’s Eat Snails!” recognizes our differences and shows that what sets us apart also brings us together.

“Growing up in my nutty Italian family, my friends knew not to say, ‘GROSS’ no matter what they saw in the Barcellona kitchen unless we all wanted a 20-minute lecture from the ‘Sicilian Godfather’ on manners and expanding our horizons! While all the other kids had peanut butter and jelly sandwiches, I was complaining about my capicola, mortadella and salami sandwiches ‘every single day Mom, really!’” says Barbara. “While other kids were grilling hot dogs and hamburgers on camping trips, we were cooking giant pots of pasta with dove and quail in homemade quick sauce!”

Barbara’s father, Giuseppe Barcellona, was born in Ramacca, Sicily 78-years-ago along with his five siblings. They all immigrated to America through Cleveland, where she was born and many of her Italian relatives still live. Giuseppe’s sister, Zia Maria Barcellona Compagnino, remained in Sicily and still lives in Ramacca to this day. “I enjoyed visiting her and all my cuginos 10 years ago and especially enjoyed sitting atop her roof watching Mt. Etna smoke in the distance, bellissima!” Barbara tells La Gazzetta. “This is my first children's book. I’m proud to have it published as I have three more behind it, one more being another Italian American story about my father and the ancient art of grafting trees. Stay tuned!”

Barbara moved to San Luis Obispo county on the Central Coast of California when she was eight. It was here that her most colorful Italian American childhood memories were made. “Let's Eat Snails!” gleans from such memories of eating snails, hunting adventures in the mountains with her parents and childhood sleepovers where her friends stood in awe at the kitchen sink full of dead birds and rabbits that were to be served for dinner that night. “I knew this story was not only going to be unique and interesting to children but important because it shares the greater message of putting aside our differences and meeting on common ground at the table where food is life, food is love and food in an adventure!”

“Let’s Eat Snails!” is endorsed by Pulitzer Prize-winning author, Junot Diaz, as well as Sicilia Canta Canada and We the Italians, along with so many more authors and organizations. “Let’s Eat Snails!” hits stands on January 12 and is available for pre-order now from NewSouth Books and via all major book retailing channels.