MUST READ: The Milan Thriller Series by Jack Erickson 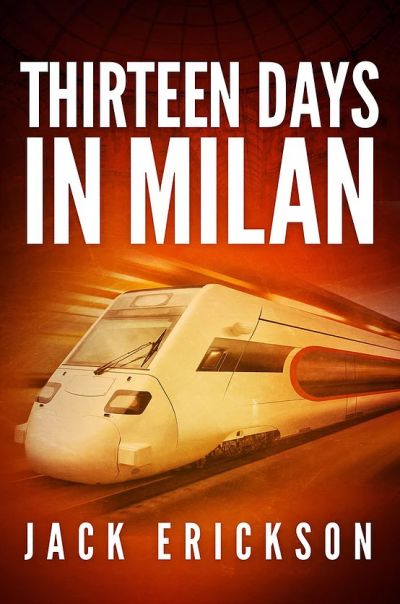 “I love mysteries. I love reading them. I love writing them.” Author Jack Erickson recently spent some time with La Gazzetta Italiana, albeit virtually as he’s currently traveling Australia and Asia, giving us some insight into his life and writing. Although not of Italian descent, Jack’s family is Norwegian and German, Jack’s fascination with Italy began years ago during his university days studying world history. Since then, he and his wife have traveled extensively throughout Italy and Sicily.

In fact, it was during one of these trips, while Jack was in Milano Centrale railway station with his wife, Lucy, that he experienced a “lightening bolt” idea that quickly became the plot for the first book in his Italian-themed thriller trilogy. The trilogy showcases the anti-terrorism police, DIGOS, at Milan’s police headquarters.

“Thirteen Days in Milan,” the first in this three-part series, features Sylvia de Matteo, an American commercial photographer and single mother whose father is a wealthy Wall Street investment banker. Sylvia is taken hostage by terrorists during a political assassination at Stazione Centrale while her 12-year-old daughter and fiancé are already aboard a Paris-bound train. During her imprisonment, she connects with one of her captors and her eyes are opened to a new world of desperation and corruption, a world very different from her privileged upbringing. Antonella Amoruso is the determined DIGOS investigator who relentlessly hunts the terrorists. The twists and turns along the way and the unlikely relationships formed keep the pages turning.

Erickson’s book offers its readers a historical peek into Italy’s political and social corruption post WWII. Although the book is set in modern times, the prologue is dedicated to the kidnapping and assassination of Aldo Moro, former Prime Minister of Italy, and the plot nods at the days of domestic terrorism caused by the Red Brigade.

While “Thirteen Days in Milan” depicts Italian terrorists, Erickson’s second book in the series, “No One Sleeps” centers around a Muslim sleeper cell preparing an attack within Milan’s city limits. Another series of page-turning events ensue as DIGOS agents work to uncover the terrorists and their plan while, again, Erickson keeps readers enthralled with his character depictions and thrilling storyline.

So, where, exactly, do storyline’s like this come from? According to Jack, “Writers get ideas for books from diverse experiences -- reading an article or book, seeing a movie, overhearing a conversation in a cafe or from a dream. A seed is planted. The writer lets the seed grow into a plot. After months or years, a book is born.” Jack’s self-proclaimed “lightening bolt” idea for “Thirteen Days in Milan” came during a 3-hour layover in Milan’s Centrale. As his wife boarded their Paris-bound train an hour before departure, a bored Jack opted to take a final stroll through the lobby to take photographs for his travel blog. Alone with his camera in Centrale, his wife, passport and luggage all aboard the train, he suddenly thought, “What if someone grabbed me, whisked me away, and I missed the train?” By the time he and Lucy arrived in Paris, an outline of opening chapters for “Thirteen Days in Milan” had been scribbled in his notebook.

Jack and Lucy, self-proclaimed gypsies, spend most of their time traveling the world, Jack no doubt always finding new and exciting subject material for a potential novel. “Vesuvius Nights,” the final installment of his Milan thriller series, is available this month.