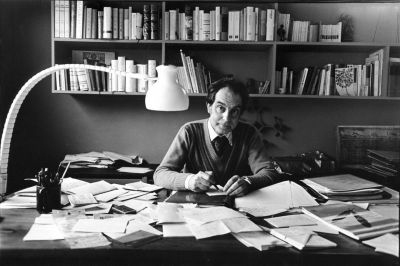 The Italian people have made exceptionally important contributions to Western culture. While we all laud the sculptors, painters and architects of the past, lesser attention has been paid to Italian authors. From the time before the Romans until today, each century has seen authors from the boot-shaped peninsula advance the art of the written word. One luminary in this constellation is Italo Calvino.

During a lecture given by Dr. Timothy Spurgin of Lawrence University, he recently described the reaction of some of his students when they first encounter Calvino. “Are you allowed to do that,” they ask as if there is some set of rules that authors are not allowed to violate. If there were rules, Calvino artfully transcended them. John Updike bore witness to Calvino’s skill and upon hearing of Calvino’s death said: “Calvino was a genial as well as a brilliant writer. He took fiction into new places where it had never been before, and back into the fabulous and ancient sources of narrative.” Calvino’s plots have a Vonnegut-like quality; another favorite author from that generation.

In 1923, Calvino was born in Santiago de Las Vegas, Cuba, a suburb of Havana, to Italian immigrant parents. Both his parents were scientists. His father an agronomist and botanist while his mother was a botanist and university professor. Italo’s proclivity for rule-breaking must have been genetic. Italo said his father “had been in his youth an anarchist, a follower of Kropotkin and then a Socialist Reformist.” His mother, Eva, schooled in the “religion of civic duty and science,” gave him his first name to remind him of his Italian heritage. After the family returned to Italy, Italo felt that the name was “belligerently nationalist.”
Italo served in WWII as part of the Italian Resistance in the Garibaldi Brigades. He drew on his experiences during the war for his first two books “The Path to the Nest of Spiders” and “Adam, One Afternoon, and Other Stories.” However, it wasn’t until he turned his attention to works with a more fantastical nature in the 1950s that he really drew the attention of the literary world.

All of his works deserve a place in your library. Yet, there are two that merit special recognition. The first of these is “Invisible Cities” which captures a conversation between Marco Polo and Kublai Khan. In this conversation, Marco Polo describes 55 different cities he visited, each description is a parable on human experience. It is said that this book is unlike any other book you might read with its unique structure and poetic style. Calvino creates a work of great fantasy that expounds on the reality of human existence.

Calvino’s second work that bears special recognition is “If on a Winter’s Night a Traveler.” The above mentioned Dr. Spurgin referred to this work as metafiction, a fiction about fiction. It takes you into the depths of the literary world, diving through the marks on a page into the actual events described to develop the relationship between the author and his creation, between the story and the reader, and finally, between the author and the reader. Throughout this book, Calvino writes in the second person propelling the reader into the heart of the story from the first few lines.

As we look over the landscape of Western literature, there are many authors and works of literature that stand out. For those of us who are cursed with an addiction to literature, whenever we start to read one book we wonder what the opportunity cost is. Is this author’s work worth the one that I am not reading? Italo Calvino’s writings make that cut. His imaginative approach to literature makes him a unique author who is well worth the reading.