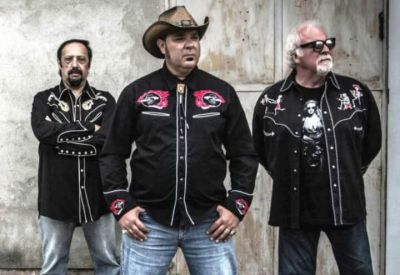 The universal yet simple nature of music allows it to travel beyond physical borders and to materialize in the most unexpected places. The issue of an unfamiliar foreign tongue is no match for the magical effect that melodies, rhythms and harmonies can have on one’s senses and emotions. Similar to culture, language, cuisine, and religion; music travels wherever human migration takes it and Italy has seen its fair share of non-native sonorities make their way onto the peninsula. Imported musical genres such as jazz, blues, rock, and hip-hop have gained a solid foothold among the more established and traditional styles in the entertainment industry.

Italian singer/songwriter and guitarist Luca Rovini was born in the city of Pisa located in the central region of Tuscany on May 25, 1973. His mother, Annalisa, worked in a college science laboratory and his father Umberto worked as a laborer in a factory but also moonlighted as a guitarist in several bands. He was also an avid painter who was inspired by the works of Florentine artist Pietro Annigoni. Luca was introduced to the acoustic guitar by his father who also trained him on musical theory. He would develop an appetite for American, English and Irish musical artists such as Steve Earle, Graham Parker, Townes Van Zandt, Joe Ely, and Dave Alvin.

He began performing publicly as a teenager and by age 19 was composing his own material and performed either alone or as a duo. He also opened for established American recording artists Elliott Murphy and Willie Nile at the Borderline Club in Pisa. In 2000, Luca sought a respite from the music club scene to dedicate himself to raising his family. He continued writing songs during this time and expanded his music catalog. A pivotal moment in his life would take place as he made the decision to revive his musical career after the painful dissolution of his marriage in 2013. The result was both therapeutic and personally rewarding as he and fellow guitarist Claudio Bianchini put the finishing touches on his debut recording “Avanzi e guai” (2013). They recorded the album in his attic on a single microphone and produced a very raw, yet inspired release which was well-received by critics and fans alike. A regional tour ensued in support of the album along with several television and radio appearances. Three songs from the album; “Scoppia la testa,” “Corri come vuoi” and the title track became instant fan favorites. Appearances at the prestigious Buscadero Day Festival in Pusiano and Buskers Festival in Ferrara garnered Luca some well-deserved recognition. Despite a marginally successful, out-of-print, four-track acoustic EP follow-up recording, he concluded his lengthy and exhaustive road trip and returned to the studio to eagerly complete his second full-length album “La barca degli stolti” (2015). This release featured noted musicians including Don Leady on electric guitar.

Even though the album was recorded in the kitchen of his small apartment, the invaluable contributions from an ensemble cast of guest musicians yielded a more substantive and polished recording. The tracks “Viaggiatore stanco” and “Il quartiere della follia” are still among their most requested songs during live performances. A fortuitous encounter with an old acquaintance, guitarist and producer Stefano Cudia, lead to a collaboration that resulted in Luca’s third full-length album “Figure senza età” (2017). The recording, decidedly more acoustic in nature, again featured important contributions from other talented musicians. The release received positive critical acclaim and the supporting tour extended well beyond the friendly confines of Pisa to now include Lucca and Milano. The tracks “Vite di contrabbando” and “Compañeros” were among the highlights of the recording. Although everything appeared promising and productive from a recording standpoint, Luca desired to establish a more stable and permanent band lineup in order to develop continuity and cohesiveness. Little did he know that across the Atlantic Ocean the wheels were set in motion that would bring Luca his most important relationship and professional partnership in the form of American poly-instrumentalist, producer and songwriter, Peter Bonta.

The fateful encounter was the result of mutual musical associations that often occur in the music world. Peter’s mother was born in Tuscany prior to WWII and later met her future husband, an infantry captain in the American Army detachment that was assigned to liberate Florence from German Nazi occupation. He would remain there for five years until he was re-deployed to join other American occupational forces in Germany. He was eventually discharged and headed back to Florence to get married and would return shortly thereafter to the U.S. with his new wife and settle in Fort Campbell, Kentucky.

Peter was later born and as an adult he eventually achieved a successful music career including stints with Artful Dodger, Rosslyn Mountain Boys and The Nighthawks. Having retired from his job at the United States Holocaust Memorial Museum in Washington in 2010, Peter and his wife, LeeAnn, embarked upon a sailing adventure throughout the Caribbean that would last five years. In time, sensing that they needed a change; Peter and his wife sold the boat and started packing to relocate to Italy. Just before they were to leave, he was invited to participate in the recording of an album of his long-time friend and guitarist, Evan Johns. Upon completion of the recording session Peter indicated his intention to move to Pistoia, Italy. Evan suggested that Peter look up an aspiring musician and loyal fan by the name of Luca Rovini. Shortly after his arrival, Peter reached out and they met. It was soon evident that they shared a similar taste and passion for music. They began collaborating on what would be Luca’s fourth recording “Cuori fuorilegge” (2018); this time, however, under the moniker of Luca Rovini & Compañeros. Peter handled the production duties as well as providing guitar and keyboard expertise on Luca’s musical compositions. Joining them were the other official members, Andrea Pavani on bass and Emiliano Baldacci on drums.

The album has since attained widespread national and international attention and success. The songs “Senza gambe ne parole,” Fuorilegge” and “Honky Tonk Señorita” were recently introduced and performed on Italian national television. For more information you can visit the band’s website at www.lucarovini.com.
Photos courtesy of www.lucarovini.com.