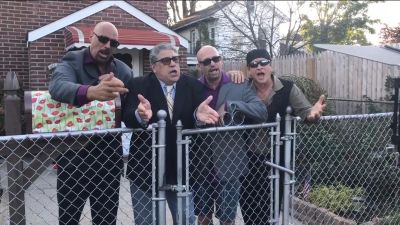 “St. Joseph” is a light-hearted, zany, short comedy set in the suburbs of New Jersey involving two very different Italian families that live across the street from each other. Donna’s house is immaculately kept inside and out. Elaine and Doug are more interested in going camping then caring about the appearance of their house. Donna obsesses on the hopes they would move out. Then her mother-in-law Virginia gives her an idea that turns into a happy chaos in the neighborhood.

Kathrina Miccio wrote, is producing and starring as Donna Adamo in “St. Joseph.” She is also making her Directing debut. She is an Artist on many levels and so proud to be Italian. Kathrina Miccio was born in New York with family roots from the Sorrento coast of Italy. She is a graduate of Wagner College Theatrical College with a BA in Fine Arts and Theater, where her desire to act began. She recently has been cast in “BIRR,” “The Fifth Borough” and “A Beautiful Distraction.” Kathrina had a reoccurring part on the Sopranos as Diane the bartender. She promises “you will laugh, sing along and talk about this story…for years to come.”

Included in the cast are: Kathrina Miccio, Lou Martini Jr. of “The Deuce,” Toni D’antonio, Angela Pietropinto of “Goodfellas,” and Dario Del Priore. The supporting cast includes Vincent Pastore from “The Sopranos,” radio personality Maria Milito, Jackie “The Jokeman” Martling, Anthony Mangano, and Charles Mandracchia, writer/director of the award-winning short film, “You Got a Problem,” has a cameo part as Peter the Wiseman and is also the Director of CGI animation for the film. Also included are Donna Drake, Jerry Parisi, Steve Stanulis, and Pat Patterson. Johnny Sousa is the Director of Photography. Kathrina is also a Breast Cancer survivor and wrote this to make up for the sorrow her friends and family felt for her while going through treatment. She hopes to be an inspiration to people, to turn something bad into something good.