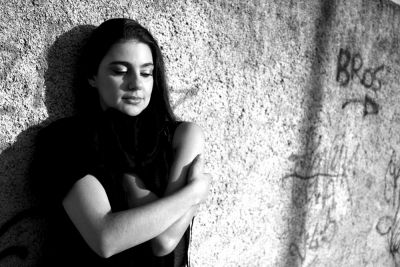 Individuals in the entertainment business, including those in the field of music, are very unique and are motivated by different factors. Successful musical artists live by the adage that “At the end of the day, people may not remember what you said or did; but they will remember how you made them feel.” A singer’s ability to “connect” with their audience is due, in large part, to the energy they transmit and the emotion that they stir within those witnessing the performance. One such person is Italian female vocalist Maria Giovanna Cherchi who was born on July 4, 1978 in the comune of Bolotana, located in the central province of Nuoro on the Italian island of Sardinia. She grew up in a musical environment and began singing as a child at age six as she was greatly influenced by her father, Pietrino, who was a vocalist in the mid-60’s Italian Beat Band “I Greff.” Maria made her first television appearance at age seven singing a composition written in the Sardinian language. During her formative years, despite the temptation to abandon her cherished Lingua Sarda and conform by singing in the more mainstream Italian language, Maria steadfastly dedicated her musical pursuits to preserving and propagating her native tongue, which in 1999, was recognized and declared as one of the “twelve historical language minorities” in Italy and became protected as such by national law. Maria was rewarded with this diligence to her culture when in 1995 she participated in her first major song competition in Sardinia and captured first place with her self-penned composition “Roccas.” She soon signed a recording contract with the independent R&G Music Group, with whom she still maintains a professional association. Maria released her debut album “Ammentos” (1999), a recording which contained traditional music and poetic themes and received both public approval and professional acclaim. The ensuing tour which followed was entitled “Cantare la Sardegna” (To Sing Sardinia) and was warmly received by her growing fan base. With the advent of the new millennium, Maria was blessed with the opportunity of collaborating with her life-long idol and legendary Sardinian singer/songwriter and poly-instrumentalist Piero Marras. The fruits of their labor resulted in her second album “Unu frore che a tie” (2001) and contained notable contributions from poet Paolo Pillonca, who provided lyrics for much of the recording. This release displayed eclectic “world music” contaminations which enhanced the “international” feel of the recording. Another successful follow-up tour saw her drawing even larger audiences. Buoyed by the popular and critical success of the recording; Maria released her third album “Terramama” (2003). It contained eight songs and included a re-interpretation of the cherished classic “Non potho reposare” as she wished to pay homage to her beloved homeland and show her gratitude for their unwavering support. Maria’s dedication to her musical colleagues was evidenced by her employing the same group of studio musicians to accompany her on performances in theatres and venues over the next few years. She returned to the studio to finalize her fourth album “Mediterranea” (2006). This recording was the product of those years touring and, due to her growing popularity, featured important collaborations with Gino Marielli of Tazenda, guitriast/arranger Uccio Soro and singer/songwriter Benito Urgu. Her songs began to find their way onto the airwaves, album sales increased significantly, television appearances became more commonplace, and she was invited to perform in far-off places such as France, Germany, Belgium, and Holland. In 2007, Maria received an exclusive invitation to sing the “Ave Maria,” in Sardinian, at The Grotto of Our Lady of Lourdes in France before an estimated crowd of 30,000 pilgrims, later performing on stage, entertaining many of those that traveled from afar with a concert featuring her most popular songs. Later that year, she travelled to Australia to perform in a special event showcasing the Sardinian language and culture. She was then selected to sing “Deus ti Salvet Maria” for Pope Benedict XVI during his Papal visit to the island. Maria was so touched by these experiences that she returned to the studio to record her fifth album “Pregadorias” (2007) which contained 16 religious songs performed in her native language. Maria’s immersion into her faith continued with the release of her sixth album “Pasca è Nadale” (2008). This limited production recording was marketed solely to the Sardinian audience taking advantage of a market that valued her linguistic devotion to their treasured culture. Inspired by the widespread appeal of her previous recording, Maria released her seventh album “Prendas” (2010). This recording was geared toward the Sardinian children’s market as the songs were both educational and playful in nature and designed to be incorporated into the school language curricula. Maria was carefully cultivating her own unique niche within the larger Sardinian society as her musical projects sought to promote the distinct and proud nature of her culture and her efforts did not go unnoticed. Choosing to now record and tour at her own pace, her eighth album “Deo e tue” (2011), displayed elements of refinement and confidence; traits that she had developed over time. In September of 2013, she was unanimously chosen to again perform in a Papal setting, this time on occasion of an official visit by Pope Francis, singing various sacred songs for the Pontiff. More recently, Maria performed at the prestigious 2014 Sofia Jazz Festival in Bulgaria, performed a duet of “Non potho reposare” on Pino Mango’s final recording “L’amore é invisibile” (2015) and was bestowed the “Il Sardo dell’anno 2015” (2015 Sardinian of The Year) award and the distinguished “2017 Premio Maria Carta” as “Female Vocalist of the Year.” Maria’s ninth and latest album is “Anima” (2016), with the title track seeing extensive time on the music charts and the second single “Due” was re-released as a duet with Nicola Nite, lead vocalist of Tazenda. For more information you can visit her Facebook page at https://www.facebook.com/Maria-Giovanna-Cherchi.
Photo courtesy of https://www.facebook.com/Maria-Giovanna-Cherchi