No-Lounge - A contemporary interpretation of classical Italian and Neapolitan standards 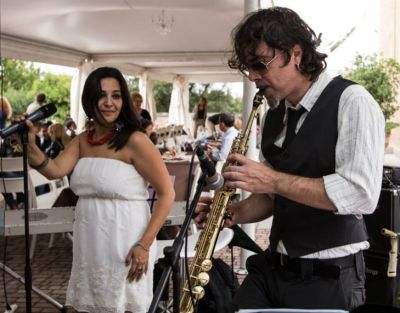 It is rare that drastically altering established and enduring works of art will yield any kind of positive result. Timeless musical melodies are often embedded deep into the sub-consciousness of people and tend to resist any radical embellishment. Avant-garde artists must tread very carefully when seeking to leave their “mark” on beloved classics as the results can be unintended and disastrous.

The Bologna-based music group No-Lounge is composed of producer, arranger, saxophonist, and vocalist Stefano Dall’Osso, a local native, and vocalist Virginia Mancaniello, originally from Naples. The duo specializes in a contemporary music style that incorporates elements of Ambient Electronica, Chill-Out, Bossa, Smooth Jazz, Urban, Vintage, and Ethnic sonorities. Stefano’s early passions included sports and soccer, but later, as a teenager, he developed an interest in music and began formally studying the clarinet and classical compositions.

His early performances in orchestral settings included the works of Rossini, Verdi and Puccini. At age 15, he transitioned to the saxophone and broadened his repertoire to include jazz arrangements. He aggressively sought out opportunities to collaborate with older and more skilled musicians who, in turn, exposed him to pop/rock, rhythm-n-blues, funk, and fusion musical styles. As a young adult, he began composing his first musical pieces which soon led to him forming his first musical group StefanoQuanteStorie in 1994, where he served as vocalist and principal songwriter. Stefano displayed great versatility by scoring theatrical presentations and authored the fantasy-fiction novel entitled “Calanchi” (2001). Ten years after forming his first band, he launched his next musical group “Jakarta Café” and ventured into world music contaminations.

Virginia Mancaniello’s earliest musical experiences began at age seven singing at public festivals. She later chose to formally study the violin and piano at the Music Conservatory in Avellino. Virginia boldly ventured north to Bologna to pursue her passions by broadening her musical horizons and refining her vocal skills. She joined the fledgling reggae group “El V & The Garden House” in 2000, serving as the lead vocalist; carefully developing her stage presence and character persona. Virginia easily mastered Latin, Bossa, Pop/Rock, and Neapolitan singing styles. While visiting relatives in the United States, she performed for the Italian community in Boston and one of her songs from her growing catalog entered into regular rotation on a popular New York Italian music radio station.

As chance would have it, the two met in Bologna in 2011 and would begin what would later become both a personal and professional relationship. It was then that they decided on the name “No-Lounge” for their new musical endeavor. Their debut album “Sixties Italian in the Groove” (2011) featured a collection of 12 popular Italian songs from the decade that saw Italy transition from the “Golden Era” of mature, elegant and beautiful Italian songs to the new, louder and un-restrained “Era of Rock and Roll.” The recording was produced under the watchful eye of noted producer Alberto Mantovani and released on his Alman Music record label. The resulting response from both the public and critics alike was positive and effusive. The two utilized the burgeoning social media and digital music platforms to diffuse professionally-produced video singles from their new release and refined their live act as they took to the road in support of their recording.

Upon completion of their tour, Mantovani encouraged the duo to consider a follow-up album that would feature Neapolitan classics which were intrinsically ingrained within Virginia’s soul but were completely foreign to Stefano whose northern upbringing rendered them enchanting but linguistically challenging. She was able to quickly “tutor” her bandmate on the subtleties of the historical and famous southern language and in no-time they were back in the studio putting the finishing touches on the 2013 “Napoli” (Traditional Naples Songs in Nu-Jazz, Bossa & Lounge Experience). The 15-track recording was warmly received as the celebrated songs, re-interpreted in the popular Nu-Jazz/Lounge Music key, resonated with listeners throughout the peninsula.

Seeking a brief respite from the music scene, the couple, whose personal relationship was now blossoming, welcomed into the world their newborn son, Diego, in April of 2015. During this time, Stefano studied jazz music theory at the Music Conservatory in Ferrara and continued composing and producing musical projects for musical colleagues and television specials in Italy and Mexico.

During the summer of 2017, the two returned to the studio to put the finishing touches on their third album “Napoli Ancora.” The 15-track recording, which was again overseen by Mantovani, contained “Napule é,” in homage to the late great Neapolitan rock/blues recording legend Pino Daniele. Other familiar titles include “Maria Mari’,” “Maruzzella,” “Vierno,” “Passione,” “Core ‘ngrato,” and “Chella ‘lla.” Invaluable participation from noted pop and jazz studio musicians such as Teo Ciavarella, Andrea Morelli, Claudio Napolitano, Gabriele Palazzi Rossi and Leonardo Ghezzi, just to name a few, contributed to the overall richness of the release. The resulting synergy created by Stefano’s internationally varied musical styles combined with Virginia’s warm, Mediterranean vocal renderings of these treasured Neapolitan standards is evident throughout. The album was officially released on Nov. 10, 2017 and is already seeing songs finding their way onto local and international Italian radio programs throughout the world.

The duo expects to produce several more video singles before setting out on a highly-anticipated tour in support of their release. For more information you can visit their webpage at www.stefanodallosso.com.
Photo courtesy of www.stefandallosso.com