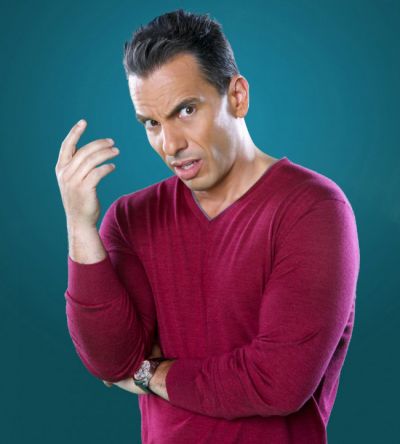 Born and raised in the Chicago area by Italian immigrants, Sebastian Maniscalco is one of the premier stand-up comedians. The son of an Italian mother and Sicilian father, Sebastian had dreams of one day sharing his comedic passion on stage.
At age 24, he left Arlington Heights, Illinois for Los Angeles becoming a waiter at the Four Seasons Hotel in Beverly Hills. Seizing every opportunity he came upon to share his gift, Sebastian made a name for himself at Hollywood’s famed The Comedy Store. “I felt if I missed an opportunity to be onstage I missed an opportunity to somebody being in the audience and seeing me,” he says on his website. And that opportunity came to life when Andrew Dice Clay enlisted Sebastian to tour with him. But, it was “Vince Vaughn’s Wild West Comedy Show: 30 days and 30 Nights – Hollywood to Heartland,” a documentary film that followed Vaughn and four comedians around the country on a 30-show, 30-night, 30-city tour, that sparked Maniscalco’s career. A massive tour ensued and a nod as the ‘2016 Just for Laughs Stand Up Comedian of the Year’, a wildly popular SiriusXM program (“The Pete and Sebastian Show”) and several major motion picture appearances including a voice-over role in “Nut Job 2” releasing this month followed.

Sebastian credits his Italian roots and family for his hilarious material. “I think that’s where I got a lot of my physical comedy from, being in that environment and watching people speak with their hands and their facial expressions,” he told the Chicago Sun Times, adding, “If you’ve got a culture that doesn’t have food, your family ain’t talkin.’ Because there’s nothing to eat. Food brings out conversation, and at the dinner table, my first audience was my family. I would make them laugh while we ate.”
Sebastian has appeared on all the “Late Night” talk shows in addition to his half-hour long and four hour-long specials for Comedy Central Presents and his special “Sebastian Live.” His next 3 specials all aired on Showtime: “What’s Wrong with People” (2012), “Aren’t You Embarrassed?” (2014) and “Why Would You Do That?” (2016). He has plans to publish his memoir “Where You Wanna Eat?” in 2017. And, he’s not stopping there. As Sebastian puts it on his website, “There’s a voice always in the back of my head saying, “Don’t rest!”

Tweet
More in this category: « Italy's Music Charts: Then and Now Looking for a Good Book? »