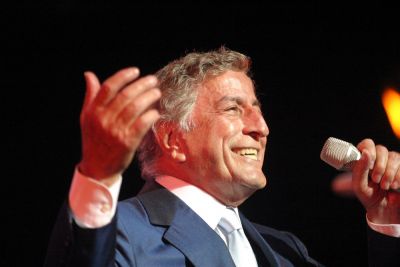 Well-known singer Tony Bennet will be continuing his global tour throughout 2017. Concerts are being sold out everywhere from California to England. With over 60 years in the music business, Bennet continues to strive in popular culture with current artist collaborations and music of his own. His popularity has yet to diminish, especially with over 10 million records sold in the past decade alone.

Born to an Italian-American family 90 years ago, Bennet has made continuous leaps and bounds in the music industry. His first major hit was in 1951 with his song “Because of You.” Many more hit songs followed as Bennet earned 19 Grammy awards and 2 Emmy awards over the span of his career.

Tony Bennet was born in Astoria, New York as Anthony Dominick Benedetto. When he was young, Bennet’s father, Italian immigrant John Benedetto Sr., instilled in his son a love of literature and the arts. Bennet’s involvement in the High School of Industrial Arts in Manhattan and his love of radio also increased his appreciate of both art and music, and his talent began to blossom. He shows his love of this culture today in both his music and his paintings.

Following his 90th birthday, Bennet was recently honored with a statue of himself erected in San Francisco in front of the Fairmont Hotel, where he had performed years ago. Another success of 2016 includes Bennet’s involvement in the Macy’s Thanksgiving Day Parade. Recently, he has performed in places such as Bridgewater Hall and Royal Albert Hall. He also has recent work in charity, including his donations to both the Juvenile Diabetes Foundation and the American Cancer Society.

Along with these successes, Bennet’s current global tour will be continuing throughout 2017. For any information about Tony Bennet or his upcoming events, visit his official site at tonybennett.com.

Tweet
More in this category: « Movie-Making Firsts by an Italian American: Robert Vignola was a Silent Era Movie Pioneer Italy's Music Charts: Then and Now »