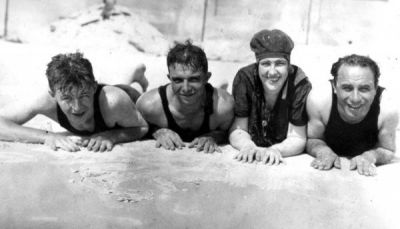 Vignola on a beach in Florida with fellow Kalem Co. cast and crew.

When we think of Italian entertainers, the people that most often come to mind are the world-renowned names like Sinatra, Tony Bennett and Frank Capra. Looking at the earlier days of film, we might recall Rudolph Valentino. But one of film history’s early pioneers was a little-known Italian named Robert Vignola and if you’ve ever enjoyed a mobster movie, a vampire flick or location shoots, you have him to thank.

Born as Rocco Vignola in the tiny town of Trivigno in Basilicata, his family emigrated to Albany, NY when Rocky, as he was called on the family’s first census in NY, was 3-years-old. His father, Donato, was a stone mason. Robert trained as a barber although his penchant for acting would take him away from the barber shop and Albany to participate in many “film firsts,” including the first gangster movie, the first vampire movie and the first film shot on location in the Holy Land.

Changing his name to Robert, he started acting in a local theater company then moved to the new novelty of silent movies. His first role was “The Black Hand” in 1907, a landmark movie that was not only a “ripped from the headlines” script, but was filmed on the street where the actual events occurred rather than in a studio. It was also the first mob-related movie ever made. (“The Black Hand” has been recently filmed again starting Leonardo DiCaprio.) Vignola joined the Kalem Company, known for their on-location filming and natural settings, participating in the first film made overseas (in Ireland). Kalem took the troupe to Palestine for the film “From the Manger To the Cross,” giving audiences their first exotic glimpse of the Holy Land on the big screen; it was also the first to depict Biblical scenes. Vignola played Judas.

The first vampire movie (“The Vampire,” 1913) and the first sequel film (“The Vampire’s Trail,” 1914) are some of his screen credits, too. While his time with Kalem was productive as an actor, Vignola shadowed his director Sidney Olcott learning the production techniques to become a director himself, in the days when films were still made in New York and Hollywood had a population of just 5,000 people. The trailblazing troupe went to Florida to film in natural light and Vignola would charm the residents into lending them furnishings and adornments for their set decorations.

Vignola went on to direct early stars like Clara Kimball Young, Rudolph Valentino, Marion Davies, Clark Gable, and Pauline Frederick. He won wide acclaim for his sets and realism and for coaxing out the best in the actor to bring more life and a sense of realism to those silent era films, which had previously been filmed like theater productions and appeared rather “wooden.” He pioneered lighting techniques to bring more depth to interior sets, making the first night scenes on film with his special devices (“Adam and Eve,” 1923). He eventually followed the movie industry exodus to Hollywood and his fame grew along with the production companies he worked with, including Famous Players and Paramount Pictures.

Robert Vignola returned to Trivigno with his family, on occasion, and ordered regional foods to be shipped to Albany to give his parents and siblings that taste of home. He quietly donated money to build the town’s war monument and maintained correspondence with some of his relatives in the “old country,” despite his new life as a famous director in a fledgling but rising industry.

The movie industry was impacted by Robert Vignola, though his name rarely comes up in the annals of film history; his participation in many of film’s “firsts” amazed viewers and inspired the next generation of producers and directors. So, next time you see a gangster film or a vampire movie or a well-done location scene, thank Rocco (Robert) Vignola.