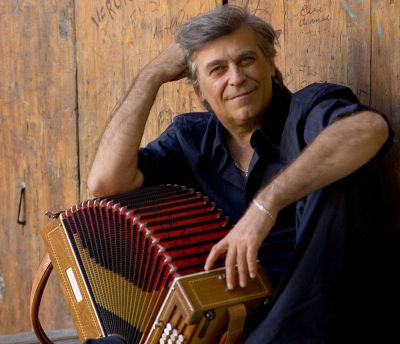 Certain individuals need not elaborate on their occupational superiority as their “body of work” will speak volumes. The “curriculum vitae” of composer, instrumentalist and researcher Riccardo Tesi displays an immense and versatile collaborative history that makes him one of the most sought-after musicians in Italy.

The melodeon (diatonic accordion) maestro was born on Feb. 18, 1956 in the comune of Pistoia, located in the northern region of Tuscany. Interestingly, his early upbringing did not reveal a person that came from a musically-endowed family nor displayed an interest for any particular instrument. Instead, as a young adult, Riccardo witnessed his first musical performance to feature an organetto player and was immediately captivated by its peculiar appearance and tonality. He chose to pursue an aggressive, self-study approach to learn and master the instrument. He soon made his professional music debut in 1978 as he accompanied fellow Tuscan, Caterina Bueno, a legendary Italian folk singer and ethnomusicologist on her theatrical and festival tours.

The invaluable experience he gained from both studio recording sessions and live stage performances would manifest themselves in the form of his debut album “Il ballo della lepre” (1983). The recording displayed musical characteristics of Iberian, Franco, Anglo, and African sonorities, performed in folk, jazz and liscio (dance) styles. Four of the eight tracks are lengthy, multi-song suites that featured the talents of guitarist Alberto Balia and poly-instrumentalist Daniele Craighead. His second release was the EP “Forse il mare” (1986). This recording contained four long and complex pieces that again highlighted the exquisite musicianship of Tesi, Balia and Craighead, along with the impassioned vocals of new lead singer and guitarist Enrico Frongia. The four musicians elected to record this album under the band name of “Ritmia,” emphasizing its Tuscan-Sardinian roots. Riccardo’s third album “Anita, Anita” (1988) ventured into the realm of the chanson française (French Song) as he now collaborated with French artists Jean-Marie Carlotti (vocals/guitars) and Patrick Vaillant (vocals/violin/mandolin), who sang half of the 10 compositions in French.

Riccardo continued his association with Vaillant as the pair released the album “Veranda” (1991) which was his first recorded outside of Italy on the “Silex” world music label located in France. The recording introduced a brass section that provided a unique new rhythm baseline and signaled a return to shorter length compositions. The songs “Capelli Neri” and “Tarantella al melograno” remain popular fan favorites.

In 1992, Riccardo had formed his own group called “Banditaliana” which was comprised of noted studio musicians Maurizio Geri (guitar/vocals), Claudio Carboni (saxophone) and Ettore Bonafè (percussionist). They would often tour and perform songs from their personal repertoires. The next album featuring Riccardo was the collaborative effort entitled “Trans-Europe Diatonique” (1993) which also contained a mélange of original compositions from Basque trixti (accordion) musician Kepa Junkera and Englishman concertina legend John Kirkpatrick.

The seventh album that he released was “Un ballo liscio” (1995). The recording contained songs that paid homage to the popular internationally-flavored, dance-style music heard throughout the regions of Emilia-Romagna and Piedmont; including polkas, mazurkas, tangos, waltzes, and paso dobles.

Riccardo’s eighth album and last recording of the 90’s was named after his band “Banditaliana” (1998). The album was mixed and produced at the Rome-based “Il Manifesto” record label which was owned by the leftist newspaper of the same name. The release featured both old and new material and was warmly received by both fans and pundits alike. “Maggio,” “Tre sorelle” and “Tevakh” were professionally produced as video singles in order to make use of the burgeoning media-sharing websites to gain increased exposure for the group.

With the advent of the new millennium and encouraged by the results of their “debut” release as a group, Riccardo and Banditaliana would record two more albums under their stage name. “Thapsos” (2000) and “Lune” (2004) were released and immediately garnered widespread positive public response and critical acclaim. Their label astutely licensed these recordings to foreign, small-sized independent record labels to access overlooked and lucrative international markets.
Riccardo remained true to his roots and continued to pursue outside projects and was invited to share his musical talents with some of Italy’s biggest musical stars including: Ornella Vanoni, Piero Pelù, Ivano Fossati, Fabrizio De André, Gianmaria Testa, Peppino D’Agostino, and Beppe Gambetta. “Acqua foco e vento” (2003) and “Crinali” (2006) saw Riccardo renew his interest in studying and interpreting, in his own unique style, the traditional folklore melodies from his native Pistoiese and neighboring Bolognese Apennines.
Building on his growing popularity, Riccardo released two solo efforts that allowed him to pursue more personal themes and subject matter which yielded the recordings, “Presente remoto” (2007) and “Solo organetto” (2007). After joining the “Materiali Sonori” music group, Riccardo participated in two more side projects that had been in the works for some time. “Sopra i tetti di Firenze” (2011) was an opportunity for Maurizio Geri and he to pay homage to the late Caterina Bueno, who had been an inspiration to both. “Samurai” (2011) permitted Riccardo to collaborate with several other renowned international diatonic accordionists. His most recent recordings “Madreperla” (2010) and “Maggio” (2014) featured Banditaliana while “Cameristico” (2013), another solo effort, displayed a seasoned and visionary artist who has cemented his place as one of Italy’s most recognizable and in-demand folk musicians.