Leonardo Di Caprio to Star in Film on the Black Hand 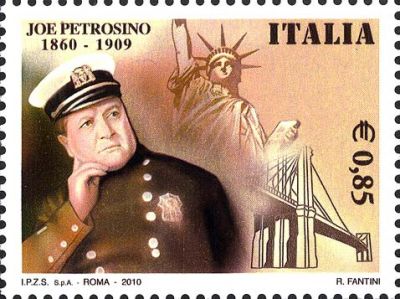 In January 2017, Variety announced a 2018 release date for “The Black Hand,” starring Leonardo Di Caprio. The film will pay tribute to Lieutenant Joseph “Joe” Petrosino of the New York City Police Department who, a century ago, took on the Mano Nera or Black Hand. Di Caprio will produce the movie for Paramount Pictures, which will be based on Stephan Talty’s book “The Black Hand.” The announcement reminds us of the danger faced by Italian immigrants of the era and of the effectiveness of hiring police officers from within the Italian community, both in NYC and in Youngstown.

The Black Hand in the U.S. was a loosely organized collection of cold-blooded Italian extortionists who terrorized our Italian ancestors just at the time they were getting settled in the U.S., roughly between 1880 and 1920. Many Mano Nera gangsters had been criminals in Italy before arriving in America. To signal their presence they would leave a crudely rendered print of a black hand. Their intimidating letters displayed a stiletto piercing a heart. Operating under the Black Hand name and employing various protection schemes, the racketeers preyed on shopkeepers, workers and even the wealthiest Italians. Distrust of the police, fear of retaliation and the inability to communicate with law enforcement because of language barriers left many Italians extremely wary of seeking justice against the Black Hand.

Immigrants from Italy made an ideal target for exploitation. Typically, they had few savings and no lines of credit, needs that the Mano Nera’s loan sharks were eager to fill. Before union contracts and workmen’s compensation legislation existed, marriages, funerals and work-related injuries all had to be paid for out of pocket. In addition, many newcomers were saving money to finance the arrival of relatives from Italy. A crisis could easily lead to seeking funds from loan sharks who could be found on any factory floor. During the worst years of the Black Hand crime spree in NYC, estimates reveal that 90 percent of Italians there felt the presence of the Mano Nera in their daily lives.

As immigration from Italy increased, many cities, including Youngstown, witnessed bombings, kidnappings, blackmail attempts, and murders as Black Hand gangsters singled out victims, some of whom were children. Since few dared to speak to the police, there was no stopping the criminal association’s growth. Moreover, the ugly notoriety of the Black Hand blackened the reputation of Italian communities wherever the organization was found.

In 1883, New York responded to the Mano Nera threat by hiring its first police officers from the Italian community. The earliest was Joe Petrosino, conversant in the major dialects of Italian. He quickly rose to prominence and eventually was promoted to lieutenant as head of the department’s undercover Italian Squad. One of his most famous cases involved the Black Hand extortion of the famous opera star Enrico Caruso. Earning the trust of the popular singer, Petrosino brought the blackmailers to justice. The famed policeman is credited for designing many innovative policing strategies that led to the conviction of Mano Nera mobsters and other criminals.

In another famous case, the Italian police lieutenant learned of an anarchist plot to murder President McKinley. Unfortunately, McKinley ignored Petrosino’s warning and died from an assassin’s bullet. In 1909, on special assignment in Palermo, Sicily, Lieutenant Joseph Petrosino was assassinated, presumably by the Black Hand. A small park in Lower Manhattan is dedicated to his memory. In 2010, the Italian Post Office issued a commemorative stamp on the 150th anniversary of his birth.

Youngstown’s first police officer of Italian heritage was Louis Venerose, born in Youngstown. He was assigned to duty in 1903. Like Petrosino, the Youngstowner could speak several dialects of Italian, a major asset in a city populated by so many newcomers from Italy. The rookie crime fighter made news his first day on the job by shooting a dangerous dog that was terrorizing an entire neighborhood.

More importantly, Venerose’s detective work in fighting the Black Hand and other criminals received national recognition from the law enforcement press. Indeed, there was much to report on, given that the Black Hand was thoroughly ensconced in the Mahoning Valley, not only in Youngstown, but also in Warren, and even in rural areas such as heavily Italian Lawrence County, PA. Convictions rose against the Mano Nera extortionists as Venerose gained the trust of the area’s Italian communities. In fact, the officer’s March 12, 1937 obituary in the Youngstown Vindicator stated that police credited him as “the leading force in exterminating the criminal organization.”

Perhaps we can learn a lesson from the examples of these two dedicated police officers. Successful policing is the result of cooperation and understanding between law enforcement and the community.