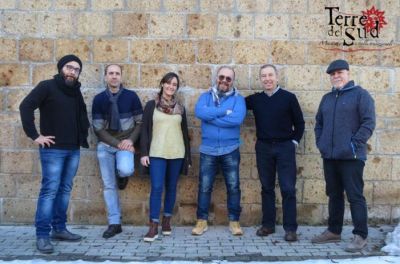 The recent resurgence in both the interest and popularity of traditional Italian song and dance is attributable primarily to the growth of user-driven, video-sharing websites such as Facebook, Vimeo, Dailymotion, and YouTube. Musicians and performers that normally wouldn’t have the opportunity to get any broadcast or media exposure have now discovered a new outlet for distributing their work and reaching markets beyond the borders of their friendly local confines.

One such musical group that has benefited from utilizing this innovative and evolving medium is “Terre del Sud.” They hail from the comune of Lanciano, located in the province of Chieti nestled in the heart of the Abruzzo region. They were formed in 2003 by founding members Mimmo Spadano (guitar/vocals), Alessandro Innamorati (percussion/tambourine), Cinzia Frattura (vocals), and Marco Pallini (bass). These four close friends had a long history of playing together and performing musica popolare (folk music) with a particular concentration on their “Abruzzesse” roots. Gradually, they refined their sound through tireless rehearsals and broadened their repertoire through extensive research of neighboring musical styles which now included other southern traditional Italian dance and song styles from the regions of Puglia, Campania, Calabria, Molise, and Sicily.

The band flourished with the addition of Mimmo’s teenage children, Emanuele (accordion/percussion/vocals) and Martina (vocals/percussion/dancer); both of whom had been immersed in music since they were young. Terre del Sud became so technically adept and musically versatile that they began receiving invitations to perform at local area concert venues and festivals. Their expert interpretations of regional “salatrella,” “pizzica,” “tarantella,” and “tammurriata” styles attracted large followings and extended the range of their popularity.

A key addition for the band occurred with the entry of Marco Pellicciotta (violin/bass) to the fold in 2006. The group also expanded their activities beyond live performances by conducting musical seminars and theatrical productions. Their heartfelt and concerted approach to maintaining and promulgating the timeless traditions of a musical style perhaps thought to be waning, instead re-kindled the latent memories of both old and young alike. After sufficiently cultivating their original music catalog, the band released their self-titled debut album “Terre del Sud” (2008) on the independent “Musicomania” Teramo-based record label.

The 14-track recording contained a mix of early traditional melodies interspersed among lively original compositions including “La seranata de lu ‘mbriache,” “Iappeca iappeca” and “L’uocchie de la regginelle.” Terre del Sud drew some of their inspiration from the poetry of various regional lyricists whose works were written in their ancient dialect. The live performances became more frequent and reached beyond the local border to include stops all throughout the southern half of the peninsula. Amazingly, the range of their appeal reached as far as Hungary as they were invited to perform in Budapest and Visegràd. With the growth of the band’s catalog of original material, the time was ripe for a follow-up recording. Terre del Sud returned to the studio and put the finishing touches on their second album “Tarantella alla Majella” (2010). The recording again contained 14 tracks, most of which were self-penned and contained various social themes. The title of the album paid homage to the nearby massif in the Central Apennines. The melancholy song “Pietre” reflected upon the devastation resulting from the April 6, 2009 earthquake that rocked the entire region. “Mare e costa,” a somber protest anthem, dealt with the unwanted intrusion of seaside oil rigs in the waters where ancient trabocchi (seaside fishing machines) have stood for centuries. Upbeat numbers such as “Tarantella a la Majella,” “’Ntricce, ntricce” and “La nirvatura” provide the necessary offset and balance for the variety of emotions that this release exudes.

Terre del Sud extended their tour schedule to include shows in central and northern regions such as Lombardia, Lazio and Friuli-Venezia Giulia. The group also made use of video releases of their most popular songs to gain global exposure. The rapid growth of the ensemble came at a cost, however, as founding members Alessandro and Cinzia, tired of the hectic pace, chose to leave the group. Terre del Sud welcomed newcomers Antonio Franciosa (tambourine/percussion) and Antonella Gentile (vocals/dancer) to the group. They picked up right where they left off, performing and authoring new material. The band would return to the studio and finalize the recording of their third album “La festa” (2013) which contained an eclectic mix of traditional and new material and vocal contributions from four of the members. Songs such as “Caterine ‘nci ‘nci,” “Zinzulusa” and “Montemaranese” showed the band at its technical best while still maintaining the infectious, high-energy sonorities that made them a popular live act. The release also received positive critical reviews and sold well at their shows which were now making use of the popular bookstore venues which presented a more relaxed and culturally-enriched acoustic environment.

Maintaining the touring pace necessary to support the release of their new recording, including the increased distances travelled, again came at a cost. Terre del Sud underwent its most drastic overhaul of personnel in 2017 with Mimmo remaining the sole original member as they set their sights on performing internationally. Their performances now included a backdrop projection documentary of the traditions and customs of their native Abruzzo culture, seeking to make the “stage experience” both informative and educational. Coming full circle, Mimmo chose to compose a musical odyssey entitled “Dalla Majella ai Trabocchi” which integrated the results of their research, writings and performances into a full theatrical production. The production has again taken them to points beyond their humble beginnings to areas in the north such as Toscana, Umbria and Le Marche. Along with Mimmo, their revamped lineup features Paola Ceroli (vocals), Peppe Tetiviola (flute), Stefano Andretta (mandolin/vocals), Vincenzo De Ritis (accordion), and Tino Santoro (percussion/vocals).

Plans are underway for a new recording in the summer of 2017. For more information, visit their website at www.terredelsud.biz.

Tweet
More in this category: « Out of the Ashes Riccardo Tesi - An Autodidactic Musical Genius and Esteemed Colleague »