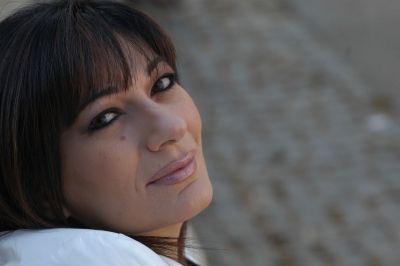 The “wisdom of silence” is described as a person’s ability to “talk less while saying more.” Italian singer/songwriter and poly-instrumentalist Mariella Nava is one of those unique individuals who speaks little, thinks much and shares only jewels of insight with her fans and musical colleagues. She was born Maria Giuliana Nava on Feb. 3 1960, in Taranto, which is in the province of the same name and the second largest city in the southern region of Apulia.

Her interest in music was discovered and nurtured at an early age by her family. They wisely encouraged her to pursue this passion and further develop her talents by enrolling in formal programs of study at musical conservatories in both Taranto and Rome. Focusing her attention on musical composition, it is not surprising that the shy and self-effacing Mariella found her initial endeavors revolving around her exceptional songwriting skills which drew upon her reflections and experiences as a source of inspiration. These efforts would not go overlooked as legendary Italian popstar Gianni Morandi read the text of her song “Questi figli” (These children) and was so captivated by her sage and astute lyrical content that he included this song on his 1985 hit album “Uno su mille.” This collaboration would eventually result in her signing her first professional recording contract a year later with RCA Italiana and lead to an invitation to the 1987 Sanremo Music Festival as a contestant in the Sezione Nuove Proposte (Newcomer’s Section).

Mariella advanced to the finals with her song “Fai piano” and finished in eighth place. She returned to the 1988 Sanremo Festival and presented the ballad “Uno spiraglio al cuore.” These two songs would make their way onto her debut album “Per paura o per amore” (1988) and, in spite of lackluster sales, it was acclaimed by the critics and earned her the prestigious Premio Targa Tenco for Miglior Opera Prima (Best Debut Recording). Mariella’s next album “Il giorno e la notte” (1989) continued her “substance over style” approach as her avant-garde lyricism on the single “Dentro di me” was censored by the Italian media for containing intense sexual overtones. This brought her unintended but welcome attention as her songs were suddenly in great demand by her peers.

She flourished as a prolific songwriter and penned compositions for Mina, Eduardo De Crescenzo, Mietta, Loredana Berté, Syria, Irene Fargo, Ornella Vanoni, Annalisa Minetti, Iva Zanicchi, Mia Martini, Mango, Tosca, Andrea Bocelli, Gigi D’Alessio, Lucio Dalla, and Renato Zero. “Spalle al muro,” performed by Renato Zero at the 1991 Sanremo Music Festival captured second place. “Per amore” written for Andrea Bocelli would become a huge international hit for the tenor and was translated into several different languages and remains one of Mariella’s most commercially successful songs. Mariella also competed at Sanremo that year with the song “Gli uomini.” She then released her third album “Crescendo” (1991) which yielded the singles “Piccolo amore,” “La mia riva” and the duet “Crescendo,” performed with Renato Zero. Mariella returned to Sanremo in 1992 and presented the song “Mendicante” which finished in 12th place. This song would make its way onto her fourth studio album “Mendicante e altri storie” (1992). The theme of the album took on a tone of feministic, social consciousness for equal rights as she demonstrated an uncanny ability to succeed in the Italian male-dominated music business.

Mariella retuned to the studio after a brief pause and released her fifth album “Scrivo” (1994) which contained the song “Terra mia” which she presented at the 1994 Sanremo Festival. The composition finished in 11th place and received the “Premio Volare” which was awarded to her by Domenico Modugno himself. Mariella chose to end her association with BMG Ariola, which had absorbed RCA Italiana in 1987, and released her first “Raccolta” (Greatest Hits) entitled “Uscire” (1995). The album cover artwork featured a type-written manifesto that elaborated her disgust with the current state of affairs within the music industry and her decision to move on with her life. After a period of four years since her last recording of original material, Mariella returned to the studio refreshed and invigorated. Her next two albums “Dimmi che mi vuoi bene” (1998) and “Così é la vita” (1999) were recorded on the Baraonda Edizioni Musicali label with the former displaying many of her earlier songwriting characteristics of shrewd social awareness and emotionally-charged ballads. The latter featured collaborative pieces with male artists such as Amedeo Minghi, Mango and Sergio Castellitto and became her best-selling recording at the time. She returned to Sanremo in 1999 and presented the song “Così é la vita” which finished in third place for her best-ever finish at the prestigious music competition.

After the new millennium, Mariella embarked on a more relaxed timetable for recording and touring and changed record labels often. Her albums “Pazza di te” (2000), “Questa sono io” (2002), “Condivisioni” (2004), “Dentro una rosa” (2007), and “Tempo mosso” (2012) all featured unique production qualities, such as the use of string orchestra ensembles, vocal collaborations with Italian and foreign singers, the incorporation of electronic and rap sonorities into her musical arrangements, and the production of video singles to access new international markets.

She made her last two appearances at the 2000 and 2002 Sanremo Music Festivals. In addition to several life-time musical achievement awards, she was most recently bestowed with the “Cavaliere Ordine al Merito della Repubblica Italiana” (Knighthood in the Order of Merit of the Italian Republic) in Rome by the President of the Council of Ministers on Dec. 27, 2014. Her most recent album, “Epoca” (2017), was released on her own music label, “Suoni dall’Italia,” and features the production talents of longtime associate Antonio Coggio. The release celebrates the 30th anniversary of her professional music recording career. For more information, you can visit her website at www.mariellanava.it.

Tweet
More in this category: « Lady Gaga to Launch Tour, Campaign, and More in 2017 Kiss Carlo »