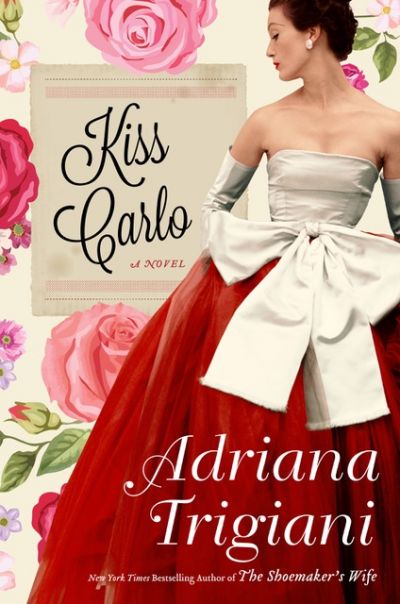 Adriana Trigiani an Italian American who has once shared, “My heritage is the foundation of everything I do.” She is the author of 16 bestsellers, including the blockbuster epic “The Shoemaker’s Wife,” “All the Stars in the Heavens,” the “Big Stone Gap” series, “Lucia, Lucia,” the “Valentine” series, the “Viola” series for young adults, and the bestselling memoir “Don’t Sing at the Table.” She is the award-winning filmmaker of the documentary “Queens of the Big Time.” Trigiani wrote and directed the major motion picture “Big Stone Gap,” based on her debut novel. It was filmed entirely on location with an all-star cast in her hometown in Virginia and was released in 2015.

She is back at the writing game again with her 17th novel. Inspired by her grandmother’s scrapbook, “KISS CARLO” (Released June 20, 2017) is a novel about a post-war family drama as buoyant and full of life as the time during which it takes place.

It is 1949 and South Philadelphia bursts with opportunity and change. Television has made its debut and manufacturing thrives as clothing factories spring up like weeds in the northeast. There are societal changes, too: women who worked during the war were now politely expected to go back into the kitchen, have the babies and become homemakers once more. This is the backdrop against which we meet the Palazzini family whose Palazzini Cab Company & Western Union Telegraph Office, owned and operated by Dominic Palazzini and his three sons---all decorated war veterans--is flourishing. Beneath the surface, though, simmers a decades-long feud that split Dominic and his brother Mike and their once-close families.

Amidst the hoopla, the arrival of an urgent telegram from Italy upends the life of Nicky Castone, an orphan who lives and works with his Uncle Dom and his family. Nicky decides, at 30, that he wants more than just a job driving Car #4 and more than his longtime fiancée Peachy DePino can offer. He finds himself drawn to the local Shakespeare theater company, its colorful players and to the determined Calla Borelli, who inherited the enterprise from her father. Now Nicky must choose the conventional life his family expects of him or chart a new course and risk losing everything he cherishes.
Trigiani says that the time she spent writing KISS CARLO was the most intense year of her creative life. The result is a novel vast in size and scope, as big as the time it depicts, as full of possibility, as rich and as joyous. It is a novel about the power of family secrets, the triumph of true love over grief and the guts it takes to leave one life and take a risk to start over again for a piece of the American dream.

Stay tuned for an opportunity to meet Adriana Trigiani in Cleveland this June while she promotes “KISS CARLO.” Details to follow in next month’s La Gazzetta.

Tweet
More in this category: « Mariella Nava - An absolute artist and unpretentious musical virtuoso Out of the Ashes »