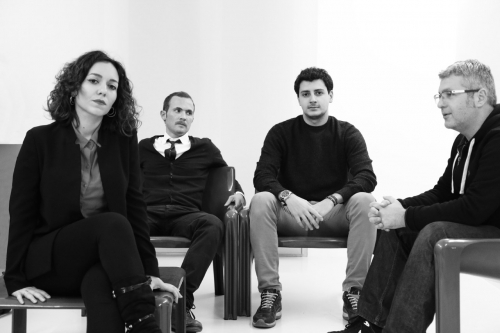 One familiar quote of conventional wisdom states that “likes tend to repel” while “opposites tend to attract.” This assessment may best describe the symbiosis that transpired which brought together the disparate styles of poet/rapper Salvatore Cannella, post-rock guitarist Gregorio Indelicato and pop vocalist Viviana Macaluso. Each one followed a distinct, well-traveled path that would lead to the inevitable formation of the musical group “Cannella” in the small borgo (village) of Sciacca, located in the region of Agrigento, on the southwestern coast of Sicily.

Salvatore, better known as “Totò” and after whom the band is named; serves as one of the singers and lyrical inspiration. He was born in May of 1980 in Castlevetrano, a comune (village) located in the province of Trapani also on the island of Sicily. At age 15, his experiences in rap and hip-hop radio broadcasting provided him the outlet to further develop and spread his love for Sicilian poetry which was inspired by distinguished regional poets Vincenzo Licata and Ignazio Russo. In time, his musical tastes spread into the areas of reggae, electronic, Nu-Jazz, and indie melodic styles. After the millennium, he travelled north to Parma to study marketing and, later, foreign languages in Montpellier, France. In 2005, he returned to Sicily and began pursuing various musical projects to sharpen his production and songwriting skills by recording several albums during this time with other aspiring artists and musicians. Gregorio, the senior “statesman” and “linchpin” of the group, was born in January of 1975 in Agrigento, the capitol center of the region; which is also the home of the ancient Greek Temples. His family moved to Sciacca by the time he was five-years-old and he began playing the guitar at age 13. During high school, Gregorio formed a punk rock band with some of his older classmates and expanded his knowledge base of music to include new and emerging genres such as alternative rock, new wave and indie pop. Upon entering college at the University of Palermo, he delved into more classic styles of progressive and psychedelic sonorities. The demands of completing his doctoral studies forced him to completely halt his musical aspirations and, upon graduation, his needs for gainful employment lead him to form his own architectural design firm where he could apply his new skills and become an award-winning enterprise.

During this time, Gregorio, who was never very far from the music scene, chose to reside in Spain for three years to refine his musical acumen by learning the bass guitar and keyboards while developing acute sound mixing skills. He returned to Sicily in 2009 and began performing regularly. Viviana, the female voice of the group, provides a proud and contrasting sound which contributes to the group’s “Sud Italiana” identity. She was born in November of 1987 in Sciacca and is the daughter of school teachers. Since early childhood, her natural musical talents served as the impetus to pursue her dreams of a career in the field of music and entrainment. Her early musical influences, like Gregorio, also included some of the more avant-garde pop artists from both Europe and America. Upon completing her high school education, she began performing with a local Italian rock band where her talents would not go unnoticed as Rafaella Daino, a local journalist and leader of the Palermo-based rock band called “Pivirama” would call upon Viviana to provide her vocal talents to the group. This experience would enhance her stage presence and persona. Viviana capped off her foreign professional growth experiences by travelling to France to study at the University of Paris. She occasionally appeared at local clubs and cabarets performing acoustic pop, rock and soul cover shows to remain in the loop. It was in 2011 that Gregorio first encountered Salvatore at an impromptu “jam session” where they both became acquainted with the other’s similar musical interests.

In 2013, Viviana was invited by Salvatore to join his Sicilian-reggae outfit called “Nakrìa” as the group set out on an extensive and successful tour throughout all of Sicily. At the end of the tour later that year, Salvatore re-kindled his professional relationship with Gregorio and together they laid the groundwork for a musical project that would soon require the services of Viviana. Their long collaborative effort would yield a bountiful harvest as the trio would release their debut album “Fuori Paese” (2014). This recording featured 15 post-rock, original songs with compositions written in both Italian and Sicilian. The themes passionately resonate of their beloved island experiences which have seen the influences of the numerous conquering civilizations over the centuries; each having left its mark on the “Pearl of the Mediterranean.” The album’s first three songs “Surrisi,” “T’ha conquistari” and “Horizon” were singles that were released in video format and have garnered critical acclaim and inspiring market results. The band returned with their second album “Alla fine” (2015) which now also featured the talents of poly-instrumentalist Vincenzo Gulino who provided percussion and acoustic rhythm guitars. This recording contains 12 original songs and builds upon the success of the first album. The synergy created by the original three, now enhanced by the new arrival, has been evidenced by the large turnouts at their live performances and their carefully crafted marketing campaign now features an increased presence on social media and improved song distribution techniques. The three video singles “Polvere,” “Frequenze” and “Toi” are receiving extensive viewing on musical media outlets and the group has commenced touring throughout the island with intentions of traveling to the mainland and beyond.

The group is currently in the process of completing their third recording “Imprevisto.” They hope to utilize the popular crowdfunding campaign to increase their exposure and possibly a tour abroad. For more information you can visit their Facebook page.

Tweet
More in this category: « International Superstar and Italian Crooner, Patrizio Buanne reaches US Shores East side, West side, all around the town... »