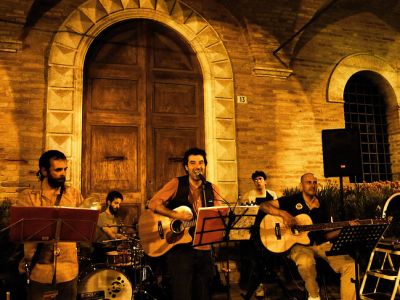 The choice to stand out from the crowd in the world of entertainment will prompt an initial curious response, but what follows next usually depends upon a combination of the talent of the performer, their rapport with the audience and a small amount of good fortune. Deficiency in one or more of those areas can usually spell doom for a well-intentioned and ambitious artist.

The story of Italian folk group Abetito Galeotta begins in the fall of 2007 in the province of Ascoli Piceno situated in the centrally located region of Le Marche. The band writes their own original compositions that are interlaced with the rich melodic sounds of acoustical accompaniment featuring classic guitar, piano, double bass, woodwinds, and percussive instruments. Manlio Agostini, co-founder and principal lyricist, provides lead vocals and inspired guitar work. His early musical influences included Lucio Dalla and Fabrizio De André. Surprisingly, he would not begin serious study of an instrument until he was 22 when he stumbled upon an abandoned old guitar at his aunt’s home. Manlio took it with him to Florence as he began his collegiate studies and later it accompanied him to Spain where he pursued foreign language studies along with a course in flamenco guitar theory. Upon completion of his coursework, he returned to Florence, formed the musical group “Oltremario” and began making his first live performances in local venues throughout the city.

He eventually returned back to his hometown in Ascoli to take formal singing and guitar lessons and, while there, he met up with another local aspiring musician, Marco Pietrzela, a skilled flautist who is the other co-founder of the group and principal music composer and arranger. Marco began his first musical experiences as a young teenager and continued his studies of woodwind instruments at the “Conservatorio di Pescara.” He later participated in live orchestral classical music performances while simultaneously studying music composition theory at the local “L’Istituto Musicale Gaspare Spontini.” He is also the author of several historical music-based research publications and frequently performs on the cembalo which is similar to the spinet and a member of the harpsichord family.

Alessandro Corradetti is the group’s keyboardist who began his music studies at the early age of 13 by enrolling in the local “Scuola di Musica LeArti” and later at “L’Istituto Musicale Gaspare Spontini.” His early influences were more contemporary musical artists such as Coldplay, Bon Jovi, Giovanni Allevi, and Negramaro. His exceptional talent would not go unnoticed and after spending some time at the “Scuola di Musica Popolare” in nearby Fermo, he was approached by Manlio and Marco and offered a position in the band. Alessandro also makes occasional use of the diamonica, a portable, keyboard-style aerophone on stage.

Simone Biancucci, the group’s percussion specialist, received training as a young teenager from established studio drummers Massimo Carloni and Marcello Piccinini. Seeking to expand his knowledge base beyond basic pop and rock sonorities, at age 20 he enrolled at the “Saint Louis Music College” in Rome and studied jazz and rhythm & blues theory under the watchful eyes of Gianni di Renzo and Davide Piscopo. He later founded the successful underground band “The Lotus” in 2002 and in 2007 brought his group to the U.S. for a mini tour. He received his musical diploma from “La Casa del Batterista Accademia” and was later invited to join Abetito Galeotta in 2012.

Andrea Carlini, the band’s bassist and backup vocalist, began his musical adventure at age 12 playing the organ in his church. The self-taught musician switched over to acoustic guitar before settling in as the bassist for the church choir. His first experiences in a group setting included participation in several American rock cover bands but he also developed a large music repertoire of Italian songs by some of the biggest artists including, Claudio Baglioni, Renato Zero, Eros Ramazzotti, Biagio Antonacci, and Michele Zarrillo. Andrea gladly accepted the invitation to join Abetito Galeotta in November of 2013 as the final piece of an intricate musical puzzle.

The fledgling group’s debut recording “Bagaglio a mano” (2010) was recorded at the studios of Valerio Tomassini in Ascoli Piceno and launched on Manlio’s personal label. The critical response was positive and the album was warmly received by the public. The original arrangements and instrumental melodies afforded the group the opportunity to embark on a small tour throughout Le Marche and the neighboring regions. Creatively crafted videos were produced for several of the songs contained on the recording giving the band increased exposure through YouTube and other musical distribution platforms. Fresh off the success of their first album, the group came back and released their second recording “Cambi di stagioni” (2013) and benefited from their new relationship with the “Music Force” recording label and the professional guidance of producer Bruno Censori at his “Piagge Studio” in Ascoli Piceno. They also assigned their territorial distribution rights to the nationally-known “Self Distribuzione” music company. As with the first album, their follow-up recording received favorable reviews for its originality and was a hit among their current fan base. Abetito Galeotta’s tour in support of the release saw them perform all throughout the Italian peninsula. Again, several videos were produced for the distribution through burgeoning audio and video streaming services such as Pandora, Spotify and SoundCloud, thereby expanding their reach to beyond the Italian borders. As a result of their growing popularity, the group has been more recently appearing on numerous local and regional television outlets.

Tweet
More in this category: « Renanera - An ardent and contemporary infatuation with southern traditions Marilù - Utilizing an animated musical approach to over-stimulate the senses »