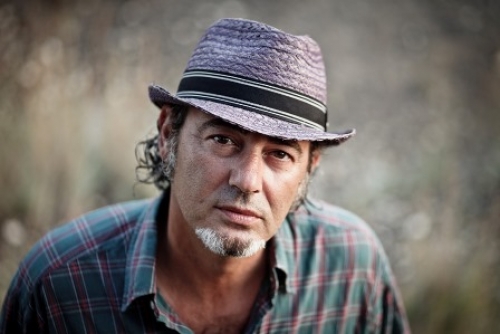 It is not uncommon for most of us to overlook genuine musical talent simply because some of these individuals have an ability to make the weaving of their craft seem so effortless. Luca Carboni is an example of a gifted singer/songwriter and musician whose sublime musical skills are taken for granted due to his gracious and self-effacing demeanor.

He was born in Bologna on October 12, 1962, the fourth of five children, into a humble working-class family. He showed an early fondness for music and by age six he was teaching himself the piano and soon thereafter learned to master the guitar. Luca cites Lucio Battisti and Francesco De Gregori as his early influences. At age 14 he started his first band, "Teobaldi Rock," serving as the principal songwriter and guitarist. The group began performing in clubs and venues through the province and established a modest but loyal following by developing a progressive rock-style that fused avant-garde and classical music sounds. They participated in the Bologna â80 Rock Festival and shortly afterwards released their first two singles "L.N." and "Odore d'inverno."

Despite the band's high expectations, these songs went largely unnoticed and the group soon disbanded. Undeterred by the group's failure, Luca's determination motivated him to seek new avenues in which to express his passion for music. A fortuitous encounter between himself and Gaetano Curreri, leader of the then-fledgling rock group Stadio, would serve as the catalyst to a successful musical career. His composition "Navigando controvento" caught the attention of the group and would make its way onto their debut record "Stadio" (1982). Emboldened by his success, Luca would spend the next year composing pieces for his first album "â¦intanto Dustin Hoffman non sbaglia un film" (1984). The recording, which was released on the RCA Italiana label, featured contributions from not only Curreri, but also Lucio Dalla and Ron. The album was a surprise hit reaching gold status as it sold over 30,000 copies and yielded three singles. The recording's overtones were geared towards juvenile coming-of-age issues which resonated throughout this particular market demographic. He immediately set out on tour throughout northern Italy in support of the release.

Upon completion of his live performances, he returned to the studio and put the finishing touches on his second album "Forever" (1985), which continued his adolescent-themed songwriting approach, but now in a more refined manner. The album was an even bigger success than the first. Luca returned to the road for an even more intense and far-reaching tour throughout the entire Italian peninsula. After a brief pause to reflect on his burgeoning success, delve into recreational painting and contemplate new ideas, he returned, enthusiastically, to the studio and released his breakout recording "Luca Carboni" (1987). The album was also recorded in Spanish to capitalize on this alternative and lucrative market. It sold over 700,000 copies and spawned two of his biggest hits to date, "Silvia lo sai" and "Fafallina." Luca now expanded his subject matter to include components of love and romanticism.

A long tour followed the release of the album and took Luca throughout many parts of Europe. In spite of his newfound popularity, Luca cherished his personal time and loathed the spotlight. This in turn, estranged him from some of the media that mistakenly interpreted his reticence as arrogance. Luca's fourth recording "Persone silenziose" (1989) was in direct response to this dilemma and the mood of the album was very introspective and melancholy. He utilized a more acoustical musical approach to express his dissatisfaction with societal encumbrances and, inadvertently, struck a new chord as this album appealed to a more mainstream adult audience. Sales achieved diamond status selling over 500,000 copies. The album's two singles "...te che non so chi sei" and "Primavera" received significant airtime. Luca was now able to control his own destiny and undertake a routine better-suited to his liking. He completed the decade before the new millennium by strategically releasing three more successful recordings "Carboni" (1992), "MONDO" (1995) and "Carovana" (1998). Notable hits over this time period included "Ci vuole un fisico bestiale," "Mare, mare," "Inno nazionale," "Ni na na," "Le ragazze," and "La cravatta," with sold-out tours in support of these platinum-selling releases immediately ensuing. Luca remained fiercely loyal and dedicated to the musicians who recorded and toured with him.

The new millennium saw Luca take a very relaxed approach to composing fresh and creative music. His eighth recording of original songs "LU*CA" (2001) was dedicated to his newborn son Samuele and contained many "message" songs devoted to him. The album yielded four singles and featured orchestral arrangements including a string ensemble. As with all his previous releases, Luca set about on another tour in support of the recording, but more importantly, to engage and interact with his ardent followers. His next two albums "â¦le band si sciolgono" (2006) and "Misiche ribelle" (2009) saw him work in a more collaborative fashion with many of his contemporaries, a who's-who of greats, including Pino Daniele, Tiziano Ferro, Francesco De Gregori, Lucio Dalla, Franco Battiato, Francesco Guccini, Enzo Jannacci and Edoardo Bennato. The results were impressive and the albums each achieved multi-platinum status and positive critical reviews.

On his eleventh album "Senza titolo" (2011), he returned to composing all his own material as well as experimenting with newsounds and themes. The album yielded four singles as well as accompanying video clips. His most recent release, the gold-selling "Fisico & politico" (2013), met a life-long dream as this raccolta (greatest hits) featured the vocal contributions of many of his admired colleagues including Elisa, Jovanotti, Biagio Antonacci, Tiziano Ferro, Cesare Cremonini, and Alice and Samuele Bersani.

Upon his return from the compulsory supporting tour, Luca has turned his efforts to writing and producing other up-and-coming musical artists. For more information you can visit his website at www.lucacarboni.it.