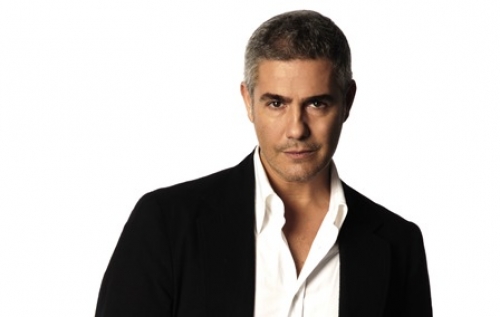 There are examples of musical artists who must venture beyond their comfort zone to seek their fame and fortune. Inexplicably, they find that their gifts are more appreciated and desired in the least expected places. Italian operatic tenor, Alessandro Safina, born in Siena on October 14, 1963, is one such individual. Interestingly, he has found greater acceptance of his talents outside his native Italy. His early interest in classical music was nurtured by his parents, both of whom were opera enthusiasts, and by age nine, he began studying music theory. He later enrolled in a music academy at age twelve to further develop his vocal technique and musical awareness. The decision was made to seek admission to the prestigious "Conservatorio di Musica - Luigi Cherubini di Firenze." His application was unequivocally accepted and he began his formal training in the principles of "bel canto."

Alessandro's studies were augmented by practical application as he appeared in numerous performances usually in the leading role on stages and venues throughout Europe. One of his initial triumphs was capturing first place at the 1989 "Concorso Lirico Internazionale" in the northern city of Mantova as he participated in a competition dedicated to celebrated Italian soprano Katia Ricciarelli. Throughout the early years of the next decade, Alessandro was cast as the male lead in presentations of "La Bohéme," "L'elisir d'amore," "I Capuleti e i Montecchi," and "Il Barbiere di Siviglia" at renowned theatres in London, Basel, Strasbourg, Marseille and Palermo. He further expanded his repertoire by performing in sacred productions such as Gounod's "La Messa" and Puccini's "La Messa di Gloria."

Alessandro's early inspiration was Enrico Caruso but he later grew to appreciate modern artists such as U2, Genesis, Depeche Mode, and The Clash. This amalgam of artistic styles is clearly reflected in his choice of musical compositions which exhibit elements of both opera and pop, and is now more commonly known as "popera." In the later years of the final decade before the millennium, Alessandro's impressive vocal talents attracted the attention of acclaimed Italian pianist and composer Romano Musumarra, with whom he maintains a professional association to this day. Their collaboration eventually produced positive results as they began composing and recording songs which would eventually find their way onto his self-titled debut recording, "Alessandro Safina" (2001).

This collection of compositions reveals characteristics of classical operatic vocalizations, displaying soulful overtones, combined with mainstream pop-flavored sonorities. The album yielded the hit single "Luna," which was also released in video format and remained on the charts for several months. An international version of the recording "Insieme a te" was released in over 30 foreign countries, earning gold status in Brazil and Taiwan and platinum sales in the Netherlands.

His tour, in support of the recording, included stops throughout Europe and South America. His breakthrough performance at the Greek Amphitheatre in Taormina in Sicily at the foot of Mount Etna in September of 2001 was broadcast as a PBS "Great Performances" public television music special and later released on DVD in February of 2003. In the waning months of 2001, Alessandro performed alongside prestigious musical artists such as Elton John, Cher and Jennifer Lopez at the 73rd Royal Variety Performance in honor of Queen Elizabeth of England. He returned to the road and made additional appearances in the United States, Canada and South Korea. In March of 2002 he was invited to appear at the Sanremo Music Festival and performed the composition "Del perduto amore." Shortly thereafter, he performed a duet with Elton John as they recorded a new version of his hit single "Your song" which reached the Top 5 of the British Charts. He received the "Mario Lanza Award" which acknowledged him as an "International Ambassador" of Italy's "Musica Lyrica."

In 2003, Alessandro made his movie debut in the cinematic feature "Tosca e altre due," which was based on Giacomo Puccini's opera Tosca, as he portrayed painter Mario Cavaradossi. Later in September, he released his second album "Musica di te" which earned critical praise and included the talents of the London Chamber Orchestra and Carlos Santana as a contributing producer. Alessandro immediately embarked on another international tour which included stops in Europe and Asia including a sold-out performance in Korea that featured a duet with Korean soprano legend Sumi Jo. He concluded another successful year by performing at the Vatican for Pope John Paul II at the annual "Concerto di Natale." He continued his appearances in operatic productions throughout the Italian peninsula, receiving critical praise for his interpretations of the lead roles. Alessandro released his third album "Sognami" (2007) which displayed his immense talents as it contained songs performed in Italian, Spanish, English, French and Turkish. His supporting tour now included stops throughout Eastern Europe, Western Asia and Northern Africa. He appeared with Sarah Brightman on her album "Symphony" (2007) performing the duet "Sarai qui." He later joined her on her 2008 PBS music special "Symphony in Vienna" singing their previous duet and a new song, "Canto della terra." Over the next few years, Alessandro carefully balanced operatic theatrical appearances with fully-staged orchestral concert performances and foreign television music specials on six continents.

His most recent recording "Dedicated" (2014) is his fourth release and was made available in the more popular and economical digital format. Romano Musumarra returned as the recording's producer and contains a variety of compositions sung in Italian, English and French.